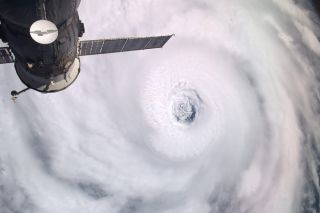 Hurricane Igor dazzled the crew aboard the InternationalSpace Station and even earned a nickname after the astronauts gazed straightthrough the huge storm's eye to see the ocean waters below.

American astronaut Douglas Wheelock and his crewmatespeered down at Igor from an observation deck as their outpost sailed 220 miles(354 km) above the storm Tuesday (Sept. 14). Wheelock posted a photo of it onTwitter, where he writes as Astro_Wheels, and dubbed the hurricane "Igorthe Terrible." [Astronaut photo: Eye Hurricane Igor.]

In an interview televised on NASA TV that same day,Wheelock said: "We looked right into the eye of HurricaneIgor,which is absolutely fantastic, the view. We could see the water of the AtlanticOcean right down through the eye, and it was spectacular. It really just takesyour breath away ? no words to describe it."

"The hurricanes are spectacular," she said.

As of today (Sept. 15), Igor had weakened slightly,though it remained a Category 4 hurricane on the Safir-Simpson scale, accordingto the National Hurricane Center. The strongest storms are labeled Category 5.

Wheelock photographed Julia as it left the Cape VerdeIslands, before it produced the wind speeds fast enough and barometric pressurelow enough to gain hurricane status. In his Twitter post, Wheelock said heexpected Julia to grow stronger.

"Currently only a tropical storm, but showingtremendous organization and rotation," Wheelock wrote. "I think wemay hear more from Julia in the coming days." Currently it is a Category 4hurricane like Igor.

Space station astronauts have been keeping a close watchon the 2010 hurricane season, which runs from June through November. Stormscientists are also tracking another potential hurricane, Tropical Storm Karl,as it makes landfall on Mexico's Yucat?n Peninsula. Coming back out over theGulf of Mexico, it could strengthen into a hurricane before making landfallagain along the coast of Mexico.?

The space station is currently home to six astronauts:three Americans and three Russians.