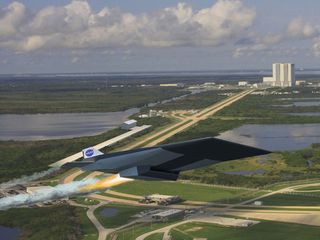 This artist's concept shows a potential design for a rail-launched aircraft and spacecraft that could revolutionize the launch business. Early designs envision a 2-mile-long track at Kennedy Space Center shooting a Mach 10-capable carrier aircraft to the upper reaches of the atmosphere. Then a second stage booster would fire to lift a satellite or spacecraft into orbit.
(Image: © NASA/Artist concept)

Imaginethis: A wedge-shaped aircraft attached to a supersonic jet engine is hurtlingalong an electrified track, carrying a pod or spacecraft destined for orbit.

Soundfarfetched? It may not be.

A team ofengineers from NASA's Kennedy Space Center in Florida and some of the agency'sother field centers are looking into this and other novel launch systems basedon cutting-edge technologies.

One earlyproposal calls for mounting the launching aircraft on scramjets, which are air-breathing jet engines driven by supersonic combustion.

The aircraftwould fly up to Mach 10, using the scramjets and wings to lift it to the upperreaches of the atmosphere, and then a small payload canister or space capsulesimilar to a rocket's second stage would fire off the back of the aircraft andinto orbit.

After thehigh-altitude launch, the mother aircraft would return to land on the runway whereits trip began.

"All ofthese are technology components that have already been developed orstudied," Starr said in a statement. "We're just proposing to maturethese technologies to a useful level, well past the level they've already beentaken."

The scramjetlauncher project could form the foundation of a future Advanced Space LaunchSystem, with elements spread across different NASA centers to make it work, agencyofficials said.

At theKennedy Space Center, a 2-mile (3.2-kilometer) test-launch track could beinstalled between NASA's huge Vehicle Assembly Building ? where shuttles areassembled for launch ? and Launch Pad 39A, from where orbiters blast off.

But thereare some challenges. To launch on an electrified track, for instance, the trackwould have to withstand at least 10 times the speeds commonly seen on tracksused for roller coasters, NASA scientists said. Roller coasters typically run about60 mph (100 kph), they added.

NASA scientists also are looking into other methods of powering atrack-launched vehicle.

A study intoa rail launcher that uses gas propulsion is under way, with Starr's teamapplying for more funding through NASA's innovative-technology program topursue it.

As for aircraftlaunching from a rail, there are some real-world tests for designers to draw on. NASA's X-43A,or Hyper-X, program and the U.S. Air Force's recent X-51 scramjet tests haveshown that scramjets can achieve remarkable speeds.

In late May,the Air Force's X-51AWaverider scramjet test vehicle set a world record for the longest hypersonicflight. The vehicle flew faster than Mach 5 for more than three minutes, comparedwith the previous record of 12 seconds by NASA's X-43A craft in 2004.

Scramjet vehiclescould be used as a basis for a commercial launch program if a company decided to takeadvantage of the basic research NASA performed along the way, Starr said.

Starr andhis engineering team propose a 10-year plan that would begin with launching adrone similar to those used in the ongoing Air Force tests. More-advancedmodels would then follow, with the goal of developing a vehicle that can launcha small satellite into orbit.

The AdvancedSpace Launch System is not geared to replace NASA's retiring space shuttlefleet, or any other manned spacecraft program, Starr said. But if the early unmannedlaunches were successful, the system could eventually be adapted to carryastronauts, he said.

"It's not very often you get to work on a major technologyrevolution," Starr said.