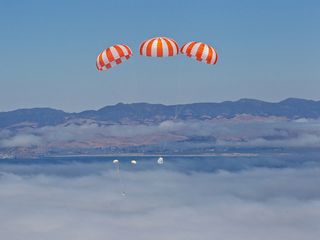 A new private spacecraft designed to carry supplies to the International Space Station has passed a major milestone — a high-altitude drop to its parachutes and ocean splashdown.

The drop marked the last in a series of tests to validate Dragon's parachute and splashdown systems before the spacecraft's maiden launch on SpaceX's Falcon 9 rocket, which is expected later this year.

While SpaceX currently plans to use unmanned Dragon capsules to the space station for cargo deliveries, the company said the drop-tested systems that could be used for crewed Dragon vehicles as well.

"By holding the Dragon to stringent standards for manned missions from the start, tests like this will ensure the highest quality and reliability for Dragon over the long term," said SpaceX CEO Elon Musk, the millionaire co-founder of the Internet payment system PayPal, in a statement. "We are proving, every day, that the future of American missions to space will rely on American-made commercial companies."

SpaceX launched its first Falcon 9 rocket in June from Cape Canaveral Air Force Station in Florida in a successful test flight of the two-stage booster.

This SPACE.com graphic shows a comparison of SpaceX's Falcon 9 rocket and Dragon spacecraft to Russia's Soyuz vehicles and NASA's space shuttles. NASA currently plans to rely on American-built commercial spacecraft, when they become available, to ferry supplies and astronauts into low-Earth orbit after its space shuttle fleet retires next year.

The space agency's plans to fly two more scheduled shuttled missions to complete construction of the International Space Station. The addition of a third shuttle mission is under discussion in Congress. Once the shuttles retire, NASA will use Russian, European and Japanese spacecraft to send supplies and astronauts to the station until commercial American vehicles are available.

During the Dragon drop test, SpaceX used a helicopter to drop the space capsule over a target zone about 9 miles (15 km) off the coast of Morro Bay, Calif., about 45 miles (73 km) north of Vandenberg Air Force Base.

Two secondary parachutes deployed to stabilize and slow the space capsule. They were followed by three main chutes — each 116 feet (35 meters) wide — which slowed the vehicle even more during its descent and splashdown into the Pacific Ocean. Recovery ships then returned the craft and its parachutes to shore.

"Data gathered during the drop test will be invaluable as we prepare for the upcoming demonstration flight of the first operational Dragon spacecraft," said Chris Thompson, SpaceX vice president of structures.

Landing of an operational Dragon is a far more precise operation than seen in the drop test. In an actual landing, thrusters will fire during re-entry, ensuring the craft lands less than one mile from its target (winds can push it off target slightly). In low winds, Dragon's landing accuracy will be within a few hundred feet, SpaceX officials said.

Once SpaceX demonstrates the ability to control Dragon's re-entry, the company plans to add deployable landing gear to the craft and use thrusters to bring Dragon down on land.

Dragon's parachute test comes close on the heels of the Falcon 9's maiden flight, which took place this past June in Florida. SpaceX launched the Falcon 9 into successful Earth orbit, about 155 miles (250 km) up.

The spacecraft will initially be used to transport cargo to the International Space Station, under a $1.6 billion contract with NASA, with flights slated to begin in 2011.

The cargo ships are designed to fly near the International Space Station and be grappled and attached to the outpost using the station's robotic arm. Plans for a crew-carrying Dragon spacecraft show the vehicle carrying up to seven astronauts.

Musk and other SpaceX officials have said that a manned version of the Dragon spacecraft could be ready for flights within three years of receiving orders from NASA.