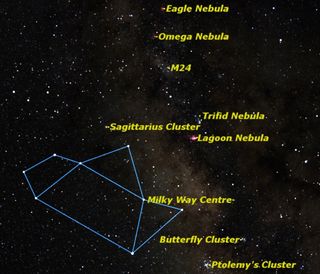 Riding low in the summer sky is the constellation Sagittarius, looking like a teapot and containing some of the finest deep sky objects. Full Story.
(Image: © Starry Night® Software)

One of the greatestpleasures on a warm summer evening is to sit outside and enjoy the riches ofour Milky Way galaxy, with one such treasure ? a cosmic teapot ? making aterrific target for skywatchers this week.

To spot this humble teapotin the sky, the key is the constellation Sagittarius, the archer centaur. Eightof the brightest stars in Sagittarius form an asterism called "theteapot," which appears low on the southern horizon.

(This graphic showshow to spot the teapot asterism in the summer sky.)

An asterism is an obviousgrouping of stars, too big to be a star cluster and too small to be aconstellation. The most famous asterism is theBig Dipper, known as "the Plough" in Britain, the seven brightest stars ofthe constellation Ursa Major.

The Sagittarius teapot hasits handle on the left, its spout on the right, and its lid on top. The richstar clouds and nebulae of the inner Milky Way rise from its spout like cloudsof steam.

Most people in our modernworld have never seen the Milky Way because of the lightpollution which pervades our urban skies.

In his book"NightWatch," author Terence Dickinson tells the story of how manypeople in Los Angeles flooded emergency phone lines after a late-nightearthquake knocked out the power to report a strange silver cloud in the sky: OurMilkyWay galaxy.

So, the first requirementfor seeing the Milky Way is a really dark sky, which you will only find farfrom major cities. If you're in the northern part of North America, it willhelp to have a clear southern horizon, as the center of our galaxy is deep insouthern skies.

Although the teapot's"steam" can be appreciated with the naked eye, it is at its best when viewedthrough a small binocular, say 7x50 or 10x50.

How to see the cosmicteapot

Start with the spout of theteapot and sweep slowly upwards. Even in less than perfect skies, you will seelarge cloudsof distant stars.

First you encounter two ofthe brightest emission nebulas in the sky: the Lagoon Nebula (Messier 8) andthe Trifid Nebula (Messier 20). Both of these are active star-forming regionslike the Orion Nebula.

The Trifid Nebula (one "f")is named for its three-part appearance, not for the Triffid (two "f"s) aliensin Jun Wyndham's book "Day of the Triffids."

Further north you willencounter two more emission nebulas, the Omega or Swan Nebula (Messier 17), andthe Eagle Nebula (Messier 16), site of the famous Hubble image of the "pillarsof creation." Between the Omega and Trifid Nebulae lies one of the mostintriguing objects in the sky.

Charles Messier, noted 18thand 19th century French astronomer, catalogued this as an open star cluster,Messier 24, but he was mistaken. Its true identify has only recently beendiscovered. It is not a cluster of stars at all, but instead is a windowthrough the intervening clouds of dust in the Sagittarius Arm which lets uscatch a glimpse of the inner Norma Arm of the milky way, 15,000 light yearsaway from us.

Returning closer to the teapot,some of the most brilliant star clusters in the sky can be found.

The Sagittarius Cluster(Messier 22), just above the lid of the teapot, is the third brightest globularcluster in the sky, brighter than the more famous Hercules Cluster. To the rightof the teapot's spout, across the border in Scorpius, lie two of the richestopen clusters: the Butterfly (Messier 6) and Ptolemy's Clusters.

When we look intoSagittarius, we look towards the core of the milky way galaxy. The center ofour galaxy is marked in the chart, but you won't see anything there, eitherwith naked eye or binoculars. That's because of the clouds of dust and gas inthe Sagittarius Arm which block our view of the core, 27 thousand light yearsaway. Only through X-ray and radio astronomy is it possible to study theinnermost regions of our galaxy.