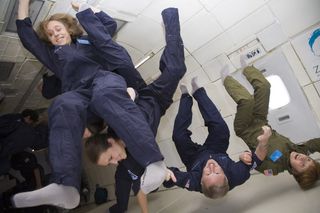 The Stern family of Colorado float in weightlessness during a Fourth of July holiday flight aboard a Zero Gravity Corporation aircraft on July 4, 2010.
(Image: © Steve Boxall/Zero-G)

Like many American families across thecountry, the Stern family of Colorado celebrated the Fourth of July holidaytogether on Sunday. But instead of a traditional barbecue or picnic, the familytook to the skies for a novel weightless daytrip on a Zero Gravity Corporation(Zero-G) aircraft.

Here, journalist and eldest Stern daughterSarah Stern describes the experience of the July 4th trip, which was arrangedas part of a project led by her father ? planetary scientist Alan Stern ? investigatingthe scientific uses of zero gravity and suborbital spaceflights at theSouthwest Research Institute:

I woke up to hear my dad?s muffled voicesaying ?Welcome to Space Day? on the morning of the Fourth of July. Myfamily and I were about to experience zerogravity, what many have labeled the ?gateway drug? for space tourism.

We began bright and early by meeting for Zero-G orientation in a conferenceroom in a Hyatt hotel in Reston, Va. We were given flight suits withupside down nametags so that we could tell who was who during our floatingexperience. Once you have completed your first flight aboard G-Force One,you may turn your nametag around to show that you are no longer a first-timeflier.

We were placed in a group with severalAustralian high school students who came to America to fly with their physicsteacher and experience weightlessness. Along with them, we met passengerswho flew to Washington D.C. all the way from Ireland and Texas.

We also met RichardGarriott, an entrepreneur who spent time at the International Space Station,and was celebrating his birthday by making yet another Zero-G flight.

Unfortunately, we were unaware that we were not allowed to bring our ownexperiments onboard without prior permission, so we ended up having to leaveour materials behind before we arrived at Dulles International Airport for ourdeparture.

We boarded the flight, which smelled stronglyof rubber, and had about 40 seats in the back of the plane.  In front ofthe passenger seats, there was a large padded room dubbed the "floating lounge."

Space Adventures, which owns Zero-G, hadFAA-approved flight attendants who gave the exact same speech as they do aboardnormal flights, though with a bit more gusto than usual. Their job happensto have a few more perks than the typical flight attendant, who is relegated todelivering half cans of soda midflight rather than simulating modernspaceflight.

Oncewe were shoe-less and at cruising altitude, we were instructed to lie on thefloor in the floating lounge and stare at the ceiling with our feet facing theback of the plane. As we climbed in altitude while lying down, the forceof gravity felt strong and similar to being pulled toward the floor by ahuge magnet.

I felt the skin on my face peel back slightlyas we edged into our first parabola. We eased into weightless by startingwith Mars gravity, which is about one-third of Earth?s gravity. Afterbeing pulled to the floor, there was a brief second before we could feel theplane dropping and then we began to float briefly.

Next, we cruised into lunar gravity, which is about one-sixth of Earth?sgravity. With both Martian and lunar gravity, you are not entirelyweightless, though doing pushups and jumping around is much easier to do, as ifyou were on a trampoline.

Zero-G uses incrementalweightlessness in order to decrease the disorientation once you begin toexperience zero gravity. Soon after we began to feel slightly lighter, we heardthe command ?feet down, coming out,? which ordered us to lay down with our feetfacing the back of the plane. Then we began the 12 zero gravity parabolas,which was far less than the 40 to 80 parabolas done in NASA?s K-Bird aircraftonce used for weightless flights.

After we glided into the parabola, thepressure of gravity suddenly decreased as the passengers floated magically uptoward the ceiling of the plane.

Experiencing zero gravityis a disorienting feeling because the loss of muscular control is bothexhilarating and discomforting. Throughout your entire existence on Earth,you have had the usage of your muscles to move around.

Once you are weightless, your movement issuddenly uncontrollable. You collide into walls and people and the onlyway to move to another area is to push off from the padded walls of the cabinlightly.

As I looked down the cabin, there were about 40 of us laughing and spinningaround uncontrollably, while one photographer glided from edge to edge tocapture the moment.

After doing the first few parabolas, youlearn how to be more agile with your movements. Although you cannot reallycontrol them, you can curl your body into a defensive posture and avoidflailing limbs in order to minimize injury.

During our first zero gravity parabola, mymother was accidentally drop-kicked in the stomach, which knocked the wind outof her for a few minutes. Once everyone got their bearings and was getting usedto entering in and out of parabolas, the real fun began.

My dad was able to bring a small paper airplane on to the flight, which flewup and backward as we exited each parabola. The passengers spent severalof the parabolas trying to catch floating M & Ms and droplets of water intheir mouths.

By the time we got to the last few parabolas,I felt incredibly nauseous. Luckily, my mission was accomplished: I wasable to avoid vomiting, though one other passenger was sick during the flight.

After exiting the final parabola, we watched the candy and the water hit thefloor of the cabin and everyone returned to their seats. Once the flightwas over, we were told by Garriott that the ?experience is not merely asimulation of what it is like to float away in space, it is identical.?

Faces across the room lit up, awestruck at the possibility that we couldexperience what it is like to be an astronaut on an otherworldlyvacation that we will never forget.

Sarah Stern is the editor of the politicalblog New Era News, oldest daughter of planetary scientist Alan Stern and afreelance writer living in Boulder, Colo. This article was written forSPACE.com.