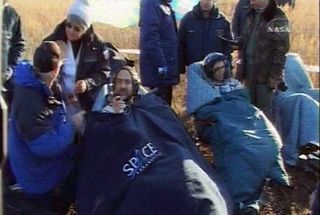 A Soyuz spacecraft has returned safely from the International Space Station, touching down with an American space tourist and two Russian cosmonauts in a picture perfect landing that followed two flawed descents on similar vehicles.

The Russian-built Soyuz TMA-12 spacecraft set down on the frigid Central Asian steppes of Kazakhstan at 11:37 p.m. EDT (0336 Oct. 24 GMT) Thursday, though it was mid-morning Friday at the remote landing site. Freezing temperatures greeted the spacecraft's crew — space tourist Richard Garriott, Expedition 17 commander Sergei Volkov and flight engineer Oleg Kononenko — in what was the first on-target Soyuz landing in just over a year.

Volkov and Kononenko turned the station over to its new tenants — Expedition 18 commander Michael Fincke of NASA and Russian flight engineer Yury Lonchakov — as they wrapped up their 199-day spaceflight. Their third crewmate, NASA astronaut Gregory Chamitoff, stayed behind to join the Expedition 18 crew.

Garriott, creator of the Ultima online computer game series and son of NASA astronaut Owen Garriott, paid $30 million for his 10-day stay aboard the station under a deal between Russia's Federal Space Agency and the Vienna, Va.-based firm Space Adventures. In all, he spent 12 days in space to become the station's sixth paying visitor and the first American second-generation astronaut.

The three returning spaceflyers were hoping for a smooth landing, but had steeled themselves for a rough ride.

The last two Soyuz spacecraft to land, in April and October 2007, respectively, returned under a backup ballistic mode due to separation issues between the three-segment vehicle's crew capsule and service module. Those landings set down hundreds of miles off course and subjected astronauts to higher than normal gravitational stresses.

Russian engineers tracked the glitch to electromagnetic interference with one of a series of explosive bolts between the two modules.

Volkov and Kononenko removed the suspect bolt in a July spacewalk. New software to aid in a smoother landing and extra recovery helicopters were also employed, but were unneeded in the near-perfect landing.

"The Soyuz operated wonderfully," Garriott said after landing in NASA TV video. "Every operation went off without a hitch."

During their six months in space, Volkov and Kononenko performed two spacewalks in July and hosted one visiting NASA shuttle crew in June. They also helped install and activate Japan's tour bus-sized Kibo laboratory during the shuttle visit.

Spaceflight: The next generation

Garriott and Volkov made a bit of space history with their successful landing.

Their return marked the end of the first spaceflight to include two second-generation spaceflyers. Volkov is the son of famed Russian cosmonaut Alexander Volkov, and made his first spaceflight during Expedition 17.

The elder Garriott, who flew aboard NASA's Skylab station in 1973 and the shuttle Columbia in 1983, was on hand at the landing site to greet his spaceflying son. Volkov spoke to his father via a satellite phone connection to Russia's Mission Control outside Moscow.

"Of course, we are looking forward to meet our families, our wives and kids," Volkov said before landing. "That's probably most what we've missed here being onboard the space station."

"I would definitely say that this has met, and in many ways, exceeded my expectations," Garriott said before leaving the station.

Garriott performed a host of science experiments and education events during his mission. He also photographed some of the same spots on Earth that his father observed more than 30 years earlier and created some zero gravity artwork while taking care not to spill paint in weightlessness.

The elder Garriott served as chief scientist for his son's mission and watched over the flight from Russia's Mission Control.

"It's been a real joy, and not just in talking to him from space," Garriott said, adding that his past year of training offered a unique chance for quality family time. "It's been a great opportunity for us to bond as adults in ways that we haven't had a chance to do in many years."

While Garriott has said in the past that he spent the bulk of his computer gaming fortune on this spaceflight, a second trip to space is not out of the question.

"There's no question I'm already starting to think about the next trip up," he said before landing.