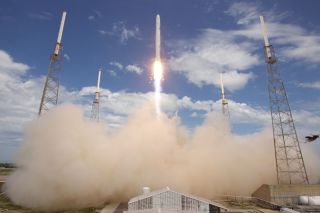 Hawthorne, Calif.-based SpaceX (Space ExplorationTechnologies) has agreed to use its Falcon9 rocket to loft Iridium's new communication satellite constellation,called Iridium NEXT, over a series of liftoffs from California's Vandenberg AirForce Base between 2015 and 2017.

"Iridium NEXT is now our largest commercial satellitelaunch customer and we are excited to play such an integral part in the mostsignificant commercial space program underway today," said SpaceX'smillionaire CEO Elon Musk, co-founder of PayPal, in a statement. "We areimpressed by Iridium's comprehensive approach and diligence in its planning asthe company prepares for the design, build and launch of Iridium NEXT."

SpaceX already has a $1.6 billion contract with NASA to haulcargo to the International Space Station on unmanned Dragon flights, as well asdeals to carry other commercial payloads.

"It really reinforces the fact that SpaceX and Falcon 9are the vehicle of choice of not just NASA but also for the commercialsector," Musk said of the new Iridium deal.

He called the Falcon rockets the most cost-competitivevehicles in the world, and said SpaceX is more similar to Silicon Valley techcompanies like Intel, rather than traditional aerospace companies, in terms ofits approach to innovations and cost reductions.

SpaceX has never launched a rocket from Vandenberg, but Musksaid getting the launch pad ready for the Iridium flights shouldn't be aproblem.

"We're confident we can get that done within 12-18months," he said.

SpaceX is also one of the leading contenders to take upPresident BarackObama's challenge for the private space industry to begin ferryingastronauts to low-Earth orbit and the space station after NASA's shuttle fleetretires later this year.

The new contract with Iridium will add even more launches tothe growing docket for the fledgling SpaceX, which already had 24 Falcon 9flights ? including commercial and NASA launches ? scheduled before thecontract.

"We are proud to be partnered with SpaceX, and want tocongratulate Elon Musk and the entire SpaceX team on its successful inauguralFalcon 9 launch," Matt Desch, CEO of Iridium, said in a statement."Hands down, SpaceX offered us the best value coupled with an unwaveringcommitment to flawless performance and reliability. SpaceX has combined thebest of aerospace and commercial best practices to design reliable andcost-effective access to space, and Iridium will be the beneficiary of thateffort."

Iridium, based in McLean, Va., offers mobile voice and dataservices across the entire planet.