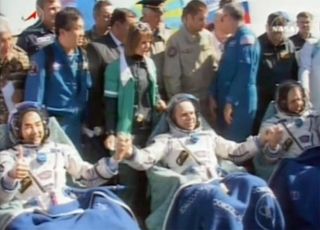 TheSoyuz TMA-17 spacecraft touched down at about 11:25 a.m. EDT (0325 WednesdayGMT) on the steppes of Kazakhstan in Central Asia with Russiancosmonaut Oleg Kotov and two crewmates ? one each from the United States andJapan ? onboard.

Recoverycrews reported that the Soyuz capsule had tilted on its side after landing,which has happened before, but overall it was a smooth landing, NASA officialssaid. It was 9:25 a.m. Wednesday local time at the landing site.

Heis returning to Earth with American astronaut Timothy "T.J." Creamerof NASA and Japanese astronaut Soichi Noguchi. The three men made up half ofthe space station's full six-personcrew and had lived aboard the orbiting laboratory since mid-December.

"Oh!I forgot something. Can we go back?" Creamer joked as the Soyuz movedever-farther away from the station. His crewmates laughed. [Photos:March's Snowy Soyuz landing.]

Allthree Soyuz crewmembers were in good health and spirits after landing, a NASAspokesperson said from the scene.

"Strapin tight guys," said station crewmate Tracy Caldwell Dyson, an Americanastronaut representing NASA who stayed behind on the station with two othercosmonauts to start the Expedition 24 increment. There were hugs all around asthe two crews parted.

Dysonwarned the three men returning to Earth not to stick their tongues out duringthe Soyuz's jarring landing. She and her remaining crewmates are in the middleof their own six-month mission.

Noguchiand Creamer also took advantage of a new space station amenity during theflight ? the ability to use Twitter from space. Noguchi regularly postedstunning photos and messages to the 252,236 followers of his Twitter account,where he wrote as Astro_Soichi.

Beforeleaving the station Tuesday, he posted one last photo of himself in a re-entryspacesuit while waving. His final message from space: "Bye!" ?

OnMonday, Kotov officially turned control of the space station over to its newExpedition 24 commander Alexander Skvortsov.

"Goodluck, guys," Skvortsov told the spaceflyers as they left the station."Have a soft landing."

Lastweek, Creamer said that after more than five months on the spacestation, he was eagerly looking forward to returning to Earth and seeinghis friends and family. And while Creamer admitted that he will miss thecamaraderie of his crew and the view of Earth from space, there are somecreature comforts that cannot be recreated in weightlessness.

"Specifically,I'd really like to drink something not from a straw and have food stay on theplate for a change," he said.

Videofrom the landing site showed Creamer taking a hearty bite from an apple givento him just after returning to Earth.

Skvortsovarrived at the space station in early April with Caldwell Dyson and fellowRussian cosmonaut Mikhail Kornienko. The spaceflyers initially joined theExpedition 23 crew and will now remain behind to await the arrival of three newcrewmembers slated to launch from Kazakhstan's Baikonur Cosmodrome on June 15.