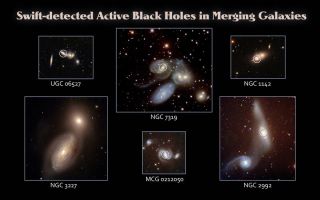 These images, taken with the 2.1-meter telescope at Kitt Peak National Observatory in Arizona, show galaxy shapes that are either physically intertwined or distorted by the gravity of nearby neighbors. These AGN were known prior to the Swift survey, but Swift has found dozens of new ones in more distant galaxies.
(Image: © NASA/Swift/NOAO/Michael Koss and Richard Mushotzky (Univ. of Maryland))

Supermassive black holes appear to light up with hard X-rayswhen their parent galaxies decide to merge, according to a survey by NASA'speeping Swift satellite. The new findings solve a mystery that has keptastronomers in the dark for decades.

Researchers had scratched their heads over why suchhigh-energy displays occurred, until now. The findings announced today confirm pasttheories that suggested that violence from galacticmergers can fuel the growth of central black holes.

"We find that about 25 percent of black holes found bySwift are in the process of merging," said team member Michael Koss of theUniversity of Maryland in College Park, during a NASA teleconference.

About 60 percent of such active galaxies will mergecompletely within the next billion years to create giant black holes.

Swift used its Burst Alert Telescope (BAT) to detect anytelltale signs of hard X-rays, which rank between gamma-rays and X-rays on theelectromagnetic spectrum of light.

Such hard X-rays can pass through interstellar gas or dustwhich otherwise blocks ultraviolet, optical and soft-X-ray light. Infraredradiation can also pass through the material, but may represent emissions froma galaxy's star nurseries rather than the central black holes.

The hard X-ray survey allowed astronomers to feel confidentthat they had spotted the majority of AGN within Swift's survey range of about650 million light-years away. (A light-year is the distance that light cantravel in one year ? about 6 trillion miles (10 trillion km).)

Koss and his colleagues then followed up by spending 20nights peering at the AGN with a 2-meter telescope at Kitt Peak NationalObservatory near Tucson, Ariz.

The galactic mergers represent a way in which supermassiveblack holes can feed as they grow, according to Joel Bregman, an astrophysicistat the University of Michigan in Ann Arbor, who was not involved with the study.Astronomers had previously known that black holes could grow by either mergingwith other black holes, or by sucking down nearby gaseous material.

"What this work does is it shows us the [black holes]feeding on gas channeled into the center [of the galaxies] at a fairly earlystage," Bregman said. In other words, supermassive black holes can kickinto high gear early on before their host galaxies have even begun to merge.

Past findings have also show that both merging galaxies andAGN are both much more common in the earlier universe, which had many moresmall galaxies than now. That indirectly supports the idea of galactic mergerstriggering the growth of black holes.

But unlike the merger galaxies that spew plenty of hardX-rays, our Milky Way galaxy has afairly quiet black hole at its center. The black hole likely goes throughperiods of outbursts and relative quiet, Bregman noted.

About 10 percent of similar-size galaxies are much moreactive than the Milky Way, said Meg Urry, an astrophysicist at Yale Universityin New Haven, Conn., who was not a member of the Swift team.

"It's kind of lucky that we're in the 90 percent thataren't very active, so there are not a lot of hard X-rays being produced andcoming our way and disturbing [Earth's] atmosphere," Urry said.

Peeking into the past

Swift's eyes could get a complementary boost from NASA'supcoming NuStarmission, which is slated for launch in 2012. NuStar would use two sets of mirror arrays that focus hard X-rays to study even more distant galaxies from 7 or 8 billionyears ago.

"It will find more distant black hole growth and AGN,so the question is whether those are triggered the same way as the [Swift]sample," Urry said in response to a SPACE.com question. "Wethink they are, but you'd like to observe them and see if that's the case."

For now, the Swift satellite continues its main mission ofwatching for gamma-ray bursts, which represent the most powerful form of energyin the universe since the Big Bang.

"We just detected our 508th gamma-ray burst about 30minutes ago," said Neil Gehrels, principal investigator for Swift at theNASA Goddard Space Flight Center in Greenbelt, Md., during the NASAteleconference. NASA celebrated Swift's 500thdiscovery of gamma ray bursts back in April.

The Swift study will appear in the June 20 issue of TheAstrophysical Journal Letters.