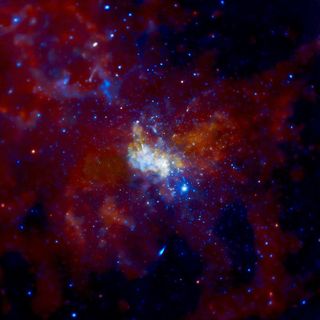 This Chandra X-Ray Observatory image of the Milky Way's central black hole Sagittarius A* and the surrounding region is based on data from a series of observations lasting a total of about one million seconds, or almost two weeks, in May 2009 and Sept. 1999. It was released Jan. 5, 2009 and helps researchers understand why the black hole eats less material than expected.
(Image: © NASA/CXC/MIT/F.K. Baganoff et al.)

WASHINGTON? New X-ray images of the supermassive black hole at the center of the MilkyWay have helped astronomers determine why that black hole is starving.

Like mostother spiral and elliptical galaxies in the universe, the Milky Way harbors anenormous black hole at its heart, dubbed SagittariusA*.

SagittariusA* is about 26,000 light-years away and has a mass 4 million times that of thesun.

New imagestaken by NASA's ChandraX-ray Observatory, revealed here today at the 215th meeting of the AmericanAstronomical Society, show the X-ray emissions of a section of the galacticcenter about 120 light-years across.

Not only dothese images show "how rich this region really is," but they helpsolve the mystery of why the black hole doesn't seem to be gobbling up as muchmaterial as scientists expect, said Chandra team member Roman Shcherbakov ofthe Harvard-Smithsonian Center for Astrophysics.

While theblack hole itself is not visible, it's presence is noted by the gravitationaleffect it has on surrounding material, and by the bright radiation generated asmaterial is accelerated and superheated before being swallowed.

In theChandra images, star clusters in the vicinity of the black hole are visible. Particle-laden"winds" expelled by the stars fuel the black hole. Astronomers havepreviously calculated that the black hole probably devours only about 1 percentof the winds coming from these stars. One percent sounds like a small amount,but even that small amount of gas ? presuming it is being consumed as expected? should make the black hole appear 100 times brighter than it actually does.

The newChandra images along with revamped models of black hole feeding show that theMilky Way's black hole devours only about 0.01 percent of the stellar winds inits vicinity.

Before these new results, astronomers have been at somethingof a loss as to explain why the black hole isn't eating as much as they predictit should, though they expect part of the reason it is a fairly quiet blackhole is the maturity of the Milky Way. The type of feeding frenzy thattakes place with more active galactic black holes likely petered out long agoin the Milky Way.

Thediscrepancy in the amount of X-ray radiation that astronomers see and what theyexpect is likely explained by some physics missing from models of black holefeeding, Shcherbakov said.

Astronomersknow that as gas spirals in toward the black hole, it heats up. Conductioncaused by this heating had previously been left out of models, so Shcherbakovand his colleagues added it in. The conduction causes some of the heat in thegas to travel outwards, reducing the strength of the radiation that resultsfrom the black hole's consumption. It also creates pressure that helps somestellar winds avoid the black hole's gravitational grasp altogether.

So sureenough, when conduction was factored in, the X-ray emissions expected from theblack hole in the model matched up well with what astronomers actually see. Theend result is that the Milky Way's black hole gobbles up 100 times less materialthan astronomers had previously predicted.