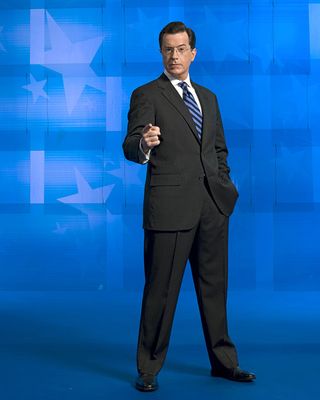 Comedian Stephen Colbert is training to be an astronautand tossed some tough questions to the crew of space shuttle Atlantis Tuesdayto find out what it's like to fly on a 25-year-old spaceship.

"Greetings spacemen, heroes all!" said Colbertduring a lighthearted televised interview with the astronauts for his ComedyCentral program "The Colbert Report."

Colbert said he's been visiting NASA's Johnson SpaceCenter in Houston to learn how to be an astronaut and asked for any tips fromthe six Atlantis spaceflyers. He's already got going to the bathroomin space down pat, he said.

"I'm already practicing peeing in a tube. I'm verygood at that," Colbert said.

Astronaut Piers Sellers told Colbert to practice eatingby mashing up his least favorite food in a plastic bag, warming it up andsqueezing it out for lunch.

"You could practice falling," Sellers added."Start small. Start with falling off the sofa and then work up to the roofof your house."

"The mission is going really well," saidAtlantis astronaut Garrett Reisman. "We've got a new antenna on the spacestation, a new six-back of batteries, a new module docked to the station andgenerally have defeated the forces of evil. So we're really happy about howthings have gone."

Atlantislaunched May 14 on a 12-day mission to deliver a new Russianresearch room and spare parts to the space station. Three spacewalks wereperformed to deliver the gear and replace batteries on the station. The shuttle is set to land in Florida Wednesday morning at 8:48 a.m. EDT (1248 GMT).

Colbert wasextremely interested in the batteries the astronauts replaced on the spacestation.

The space station's solar array batteries are actuallymuch larger and weigh nearly 400 pounds (181 kg) a piece, astronaut MichaelGood explained. So the astronauts had to work out to be able to move themaround.

That made Colbert suspicious.

"But why would you have to work out? I thoughtnothing weighed anything in space," the comedian said.

The astronauts laughed and jokingly confessed that Colberthad figured it out. They weren't in space at all.

"Busted, the whole thing's a fraud!" Colbertsaid. "No wonder they're cancelling the program. It's been a sham thewhole time!"

Actually, NASA is retiringthe space shuttles this year to make way for new program aimedat sending humans to an asteroid or Mars. After this mission, only two moreshuttle flights remain.

The shuttles have been flying since April 1981, with Atlantismaking its first flight in October 1985. According to NASA's current schedule,this is the final flight of Atlantis after 32 missions to space and 120 millionmiles (193 million km).

"What's the condition of the vehicle?" askedColbert. "Is like the 'check oil' light on the whole time?"

"Yeah, every once in a while we have to take it tothe service department," replied Atlantis commander Ken Ham.

Colbert said earlier that he loved saying the words"Commander Ham."

With the space shuttle program ending soon, Colbertwondered if his plan to seek a career as an astronaut was ill-timed and askedthe astronauts if they were dusting off their own resumes for new jobs.

Colbert also wanted to know more about Sellers, who is a British-born NASA astronaut. His accent gave him away, the comedian said.

Sellers assured that while he may be afraid of realaliens in space, he is actually a "legal alien."

"I will be traveling back in the boot of the spaceshuttle," Sellers joked. "I'm going to come back as soon as I've gotmy immigration papers sorted out."

At one point, the video signal dropped out.

Reisman is a longtime fan of Colbert's show on ComedyCentral and actually spoke to the comedian from space once before. Colbertinterviewed Reisman for his show while the astronaut was living on theInternational Space Station during a six-month mission in 2008.

In 2009, he won an online NASA poll to have a room on theInternational Space Station named after him, but the space agency named theroom "Tranquility" instead. As a consolation prize, NASA named aspace station treadmill after the comedian. It's called the CombinedOperational Load Bearing External Resistance Treadmill, or COLBERT.

Colbert did not ask if the Atlantis crew had a chance torun on his , but in a later interview Reisman said shuttleastronauts did not have the chance. The treadmill's time was already bookedsolid by the station's own six-person crew.

"The treadmill is actually being heavily used by thestation crew," Reisman said. "So unfortunately it there wasn't timeto hop on COLBERT and run him into the ground."

At the interview's end, Colbert wished the astronautswell and hoped to see them once they returned to Earth.

"Thank you so much for your courageous explorationof our final frontier," he said. "Please have a safe trip home. Welook forward to seeing you back on the good Earth."