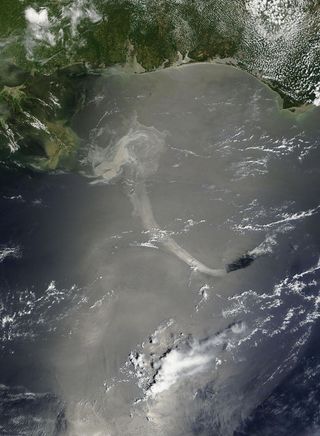 NASA's Terra satellite captured a visible satellite image of the Gulf oil spill on May 17 at 16:40 UTC (12:40 p.m. EDT) from the Moderate Resolution Imaging Spectroradiometer Instrument on-board. The oil slick appears as a dull gray on the water's surface and stretches south from the Mississippi Delta with what looks like a tail.

The dramatic flood of oil in the Gulf of Mexico is analarming sight from space, cosmonauts and astronauts on the International SpaceStation said Tuesday.

The huge oil slick off the Louisiana began April 20 when theDeepwater Horizon oil rig operated by British Petroleum exploded and latersank. The devastatingoil flow has caused untold damage to the environment and wildlife, and itis still leaking.

It is a heartbreaking sight from space, station astronautssaid.

"Just 30 minutes ago we passed over the Mexican Gulfand we took a lot of pictures of this oilspot," space station commander Oleg Kotov, a Russian cosmonaut, toldreporters on Earth via a video link.

"It looks very scary," Kotov said. "It's notgood. I really feel ? not good about that."

Also visible from their vantage point on the station is ashfrom the massive ongoing eruption of Iceland's Eyjafjallaj?kull volcano.

"Yes, we can see ash above the Europe, especially inthe evening hours," Kotov said. "We cannot see the volcano itself.Many ecological problems we can observe and monitor from this space station. It'svery useful for this perspective."

NASA astronaut Piers Sellers, a trained ecologist currentlyat the station as part of the visiting space shuttle Atlantis' crew, said theoil slick is an unshakeable example of humanity's effect on its home planet.

"These things aren't good," he said of the oilslick. "When you fly around the planet you get to see the thumbprintof man all over the place."

While mostly that thumbprint is positive, such assustainable cities and cultivation of the land for agriculture, there are alsosigns of the damage humanity has done to Earth. Nonetheless, he said, the sightof the globe gave him hope.

"We're optimistic, I think, that people will eventuallylearn to look after the planet," Sellers said.

Sellers and the five other astronauts on Atlantis' STS-132mission ? the orbiter's final planned spaceflight ? arrived at the spacestation on Sunday. They plan to stay about a week to deliver a new Russianresearch module and spare hardware to the orbiting laboratory.