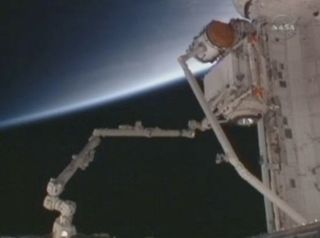 The space shuttle Atlantis' robotic arm grabs the new Russian research module Rassvet and lifts it out of the shuttle's payload bay to begin transferring it over to its new home on the station's Zarya module.
(Image: © NASA TV)

The $200 million new room ? called the Mini Research Module-1(MRM-1), or "Rassvet," meaning "Dawn" in Russian ? is themain item being delivered by Atlantis during its STS-132 mission to the station.The shuttle launched Friday on its last planned flight before it retires.

"Garrett did a good job flying," capcom SteveSwanson at Mission Control in Houston said. "It went right down themiddle, got a hole in one."

Atlantis docked at the space station Sunday, bearing sixastronauts, the new module, and a load of spare supplies to outfit thestation after NASA's three-space shuttle fleet is retired later this year.

The six shuttle Atlantis astronauts woke this morning at2:50 a.m. EDT (0650 GMT) to begin their busy fifth day in space. They were awakened by the song "Macho Man" by thevillage people, played especially for mission specialist Garrett Reisman.

"Thanks Shannon, good morning,"Reisman replied. "Good morning also to Simone, who's behind the selection ofthat tune," he said to his wife back on Earth, laughing. "We'refeeling like macho men!"

The job of installing Rassvet involved some complicatedrobotics work to get the lab transferred over.

First, STS-132 commander Ken Ham and pilot Tony Antonelli usedthe space shuttle's robotic arm to lift the module out of Atlantis'cargo bay. Then, they handed off the room to Reisman, who grabbed it with thespace station robotic arm. He then steered it over to the other side of thestation where Rassvet linked up.

"This is like a little ballet," mission specialistPiers Sellers said in a preflight interview. "Hopefully if it will workout nicely and we?ll get a seal and I think sometime, the next day, they?llopen up the hatches and see if anybody?s stowed away inside."

In fact, Rassvet is loaded full of U.S. cargo, including newlaptops, food and supplies for the station crew. The United States was allowedto pack items inside the module in exchange for delivering it to the station ona space shuttle.

"It's full of U.S. supplies right now so they?ll get inthere and clean all that out, and then it?ll be another laboratory, if youwill," Atlantis pilot Tony Antonelli said.

Later today, mission specialists Stephen Bowen and MichaelGood will prepare for their spacewalk on Wednesday, the second of three plannedexcursions during the 12-day STS-132mission.

The Atlantis astronauts spent Monday completing the first spacewalk.Despite afew glitches during the spacewalk, including a computer failure and sometrouble installing a backup antenna at the station, mission managers said Atlantis'flight is going well.

"We couldn't be more pleased with how the mission isgoing so far," LeRoy Cain, STS-132 mission management team co-chair, saidduring a Monday briefing.

There was an option for the astronauts to carry out a focusedinspection of Atlantis' heat shield Tuesday, if further data was needed on thestate of the insulating tiles that protect the orbiter from the heat ofre-entry to Earth. But so far NASA has decided a focused inspection is notneeded yet, though the astronauts may perform further scans later.

"We still have some data coming in, so we still havesome time to see whether we need any more data," Cain said.