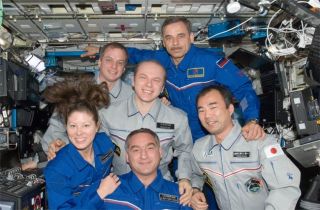 Astronauts living on the International Space Station mayhave to spend this Mother's Day far from home, but Mission Control will makesure they get a chance to send love to their moms down on Earth.

Since Mother'sDay is on a weekend, it falls during a regular day off for the spacestation crew, NASA spokesperson Josh Byerly told SPACE.com.

"The crew has some off duty time on Sunday, so theywill be free to use the station?s phone and e-mail to wish their moms a happyMother?s Day," he said.

The International Space Station is home to six astronauts ?five men and one woman ? from three different countries. Three of thecrewmembers are Russian cosmonauts, with two Americans and a Japanese astronautrounding out the team.

The astronauts are flying a staggered six-month mission tothe space station, and typically zoomaround Earth at about 17,500 mph (28,200 kph) at an altitude of about 220miles (354 km) up. But just because the spaceflyers are stuck inorbit, that doesn?t mean they're out of touch.

Although life in space can be busy, space station astronautshave continuous access to their loved ones by way of an Internet Protocol phonefor personal chats. Video conferences and radio sessions are also available tospeak with family, friends and the occasional reporter or class of students.

The astronauts also have access to the Internet from spacevia a special link to a computer at NASA's Mission Control center in Houston.

That space Internet link went live earlier this year inJanuary, when NASA astronaut Jeff Williams was in command of the orbiting lab.

His first use of the space station's Internet? Orderingflowers for his wife.

The spacestation's current Expedition 23 crew has a busy week ahead. The astronautsplan to jettison an old unmanned Russian cargo ship on Monday, move a Soyuzspacecraft to a new parking spot on the station's exterior on Wednesday, thenawait the arrival of NASA's space shuttle Atlantis ? which is due to dock atthe orbiting lab on May 16.

Atlantis is scheduled to launch toward the InternationalSpace Station Friday, May 14 at 2:20 p.m. EDT (1820 GMT) to deliver a newRussian science module, supplies and spare parts. The shuttle's six-astronautcrew plans to perform three spacewalks during the upcoming mission, which isslated to be the last-ever flight of the space shuttle Atlantis.