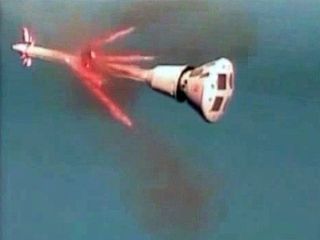 NASA's Orion Launch Abort System launched on its first test flight, Pad Abort 1, on May 6, 2010 at the White Sands Missile Range in New Mexico. Here, the escape system (left) has reoriented the Orion capsule mockup and is poised to release it after a successful launch abort.
(Image: © collectSPACE.com/NASA TV)

WHITE SANDS, New Mexico ? NASA launched a powerfulemergency escape system for its new Orion spacecraft on a successful testflight Thursday, even as plans for the crew capsule are still beingrestructured.

Called Pad Abort-1, the $220 million Orionescape system test showcased the system that could be used to rescue a crewand its spacecraft in case of emergencies at the launch pad. The test wasconducted here at the U.S. Army?s White Sands Missile Range in New Mexico.Liftoff occurred on time at 9 a.m. EDT (1300 GMT).

"Beautiful flight!" a test flight controllersaid after liftoff. This SPACE.comgraphic shows how the escape system would work.

Roaring off into New Mexico skies, the Launch Abort Systempropelled a boilerplate Orion crew module to some 6,000 feet (1,828 meters)altitude on an arcing trajectory above the desert landscape. The entire testlasted just 97 seconds.

After a rapid-fire sequence of events, including mid-airreorientation, drogue and main parachute deployments, the capsule landed about6,919 feet (2,108 meters) ? a bit farther than expected.

"Wow,that went like clockwork from what I can see," said JayEstes, NASA's deputy manager of the Orion project office. "That's anamazing test."

Thelaunchabort system is designed to activate within milliseconds in the event of anemergency on the launch pad or during initial ascent.

NASAofficials reveled in the launch escape system's successful test, which was thefirst of its kind in more than 40 years.

"It'sthe first abort system the U.S. has developed since Apollo," said DougCooke, NASA's associate administrator for exploration systems, after the test."It was a tremendous success."

NASA officials noted that, although Orion is a componentof the agency?s Constellation program that?s now under both White House andCongressional scrutiny, today?s test is part of the space agency?s ongoingmission to develop safer space vehicles for all human spaceflight applications.

?It?snice to know it?s there. You never really want to use it, but having it thereand knowing you have an out is a big plus," NASA astronaut Scott Altmantold SPACE.com after watching the successful test launch. "It?s the abortsystem that adds that extra level of safety that?s going to get us to the placewe want to be for ascent abort safety."

President Barack Obama said in an April 15 speech atNASA?s Kennedy Space Center that he favors use of the Orion Crew ExplorationVehicle in a stripped-down version to serve as an astronautlifeboat attached to the International Space Station.

In addition to the motor stack, the launch abort systemalso included a fairing assembly that covered the boilerplate Orion crewvehicle and its nose cone.

The test flight was initiated by command from a speciallybuilt mobile operations facility ? a large trailer acting as mission control.That command ignited both the Launch Abort System?s abort and attitude controlmotors, pulling the crew module in an upward trajectory from the pad to aroughly mile-high altitude.

An array of NASA centers and contractors were involved intoday?s Pad Abort-1 test.

On the industrial side of the test, Lockheed Martin isthe prime contractor to NASA for the Orion crew exploration vehicle. OrbitalSciences Corporation is responsible for the design, development, test andintegration of the Launch Abort System for Lockheed Martin.

Culbertson toldSPACE.com that today?s test was important for a number of reasons.

?You needed tocomplete this test to make sure you really did understand what you weredoing?because we are going to continue to fly people in space," he said."Whether it?s a commercially provided vehicle, or a governmentvehicle?you?re going to need a launch abort system to insure their safety.?

Alliant Techsystems, or ATK, developed the attitudecontrol motor, which includes eight thrusters producing up to 7,000 pounds ofthrust. ATK also developed the abort motor to pull the capsule away from thelaunch pad.

Aerojet of Sacramento, Calif., developed the jettison motor, which is the only motor of the three thatwould be used in all flight cases to pull the escape tower from the crewmodule.

Whileeuphoria, slaps on the back, and thumb's up signs were part of the visible scene here,where the Orion program is headed remains foggy.

?Right now we?re inthe process of trying to define what the program going forward is going to beand what the sequence will be,? said Douglas Cosens, Aerojet's Orion projectexecutive. ?We don?t know exactly what the next steps are as the Administrationand Congress figure out the next steps for human spaceflight and for the Orionprogram. But certainly what took place here today is a demonstration of aninnovative and new technology. We have lots of hope for the future of thissystem.?