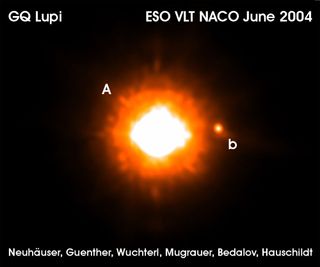 After a few close calls, astronomers have finally obtained the first photograph of a planet beyond our solar system, SPACE.com has learned.

And this time they say they're sure. Though some doubt lingers about the mass of the object.

The planet is thought to be one to two times as massive as Jupiter, according to the scientists who imaged it. It orbits a star similar to a young version of our Sun.

The star, GQ Lupi, has been observed by a team of European astronomers since 1999. They have made three images using the Very Large Telescope (VLT) of the European Southern Observatory (ESO) in Chile. The Hubble Space Telescope and the Japanese Subaru Telescope each contributed an image, too.

The work was led by Ralph Neuhaeuser of the Astrophysical Institute & University Observatory (AIU).

"The detection of the faint object near the bright star is certain," Neuhaeuser told SPACE.com on Friday.

The system is young, so the planet is rather warm, like a bun fresh out of the oven. That warmth made it comparatively easier to see in the glare of its host star compared with more mature planets. Also, the planet is very far from the star -- about 100 times the distance between Earth and the Sun, another factor in helping to separate the light between the two objects.

The discovery will be detailed in an upcoming issue of the journal Astronomy & Astrophysics. Neuhaeuser's co-authors include Ph.D. student Markus Mugrauer, who performed the observations, and Guenther Wuchterl.

The object appears to be "the first directly imaged and confirmed companion to a Sun-like star, and as such [would mark] the dawn of a new era in planet detection," said Ray Jayawardhana, a University of Toronto researcher who was not involved in the discovery but has seen the scientific paper.

Jayawardhana added, though, that some models used to estimate the object's heft show it could be tens of times as massive as Jupiter, in which case it might cross over into the territory, bulk-wise, of a failed type of star known as a brown dwarf.

Over the past decade, astronomers have found about 150 extrasolar planets. The vast majority have only been detected indirectly, by noting wobbles that the planets induce in their stars.

Earlier this month, astronomers announced the detection of a planet's infrared light using the Spitzer Space Telescope. But that observation did not involve a photograph. Instead, the system's total light was seen to drop when the planet was eclipsed by the star.

Late last year, another European team announced what might have been the first photograph of an extrasolar planet. That planet candidate has yet to be confirmed, however, because it's not yet clear whether it is orbiting the star or if it might be an object in the distant background. And even if it is a planet, it is an unusually large one -- several times the mass of Jupiter -- and it orbits a failed star known as a brown dwarf.

The object around GQ Lupi is clearly linked to the star gravitationally.

"The separation between star and planet has not changed from 1999 to 2004, which means that they move together on the sky," Neuhaeuser said. "In our case, we do have a normal plain image showing the bright star and the faint planet a little bit west of the star. The planet is only 156 times fainter than the star, because the planet is still very young and hence still forming, still contracting."

This object "appears to pass" the observational tests "for being a very low mass companion to its parent star," Jayawardhana said.

The picture of GQ Lupi and its planet is exciting to astronomers because the system resembles in some respects our own solar system in its formation years.

The planet is about 3,140 degrees Fahrenheit (2000 Kelvin) -- not the sort of place that would be expected to support life. Neuhaeuser's team has also detected water in the planet's atmosphere. The world is expected to be gaseous, like Jupiter. It is about twice the diameter of Jupiter. The mass estimate -- one to two times that of Jupiter -- is "somewhat uncertain," Neuhaeuser said.

The planet is three times farther from GQ Lupi than Neptune is from our Sun. "We should expect that the planet orbits around the star, but at its large separation one orbital period [a year] is roughly 1,200 years, so that orbital motion is not yet detected."

It's not known why it is so far out.

"It is unlikely, but not impossible, that the planet formed at that large separation, because circumstellar disks around other stars often are that large or even larger," Neuhaeuser said.

Or perhaps the planet had a close brush with another developing world. The interaction could have thrown the newly discovered planet outward while tossing the other one, which has not been detected, in toward the star. It's also possible the newfound planet has a highly elliptical orbit and is currently near its outer bounds.

The star GQ Lupi is part of a star-forming region about 400 light-years away. At 70 percent the mass of the Sun, it is "quite similar to our Sun," Neuhaeuser said. But GQ Lupi is only about 1 million years old. The Sun is middle-aged, at 4.6 billion years old.

"What's most intriguing about this discovery is that it raises a plethora of new questions regarding the origin of a this object so far out from its parent star," Jayawardhana, who is an expert on the disks around young stars from which planets form, said in a email interview.

Jayawardhana wonders whether it formed in a protoplanetary disk much closer in, roughly where Jupiter is in our solar system, and then get flung out. Or, perhaps more likely, if it was born almost at the same time as its star, fragmenting out of a contracting protostellar cloud as a brown dwarf companion.

"One way or another, this object must have formed pretty quickly" given the star's age, he said.

Knots of gas and dust have been detected around other young stars in setups that astronomers believe are solar systems in the making. Theorists believe our solar system formed when the Sun's leftovers developed into a thin disk of orbiting material. Rocky planets like Earth formed when chunks stuck together. Astronomers do not agree, however, how gas giants are born.

Alan Boss, a planet formation theorist at Carnegie Institution of Washington, called the image "really exciting." But he said there is "one little nagging doubt" in that the object's mass is only an estimate.

Christophe Dumas, who worked on the European team that announced a possible photo of an extrasolar planet last year, said of the new image: "There is still a large uncertainty on what the mass of this object is."

Weighing it precisely would involve noting the gravitational wobble the apparent planet induces on the star, but this object is too far from the star to produce a meaningful wobble. Yet even if the object is four times the mass of Jupiter it would still be considered a planet, Boss said in a telephone interview.

"I think there's a really good chance that this is an historic photo," Boss said.