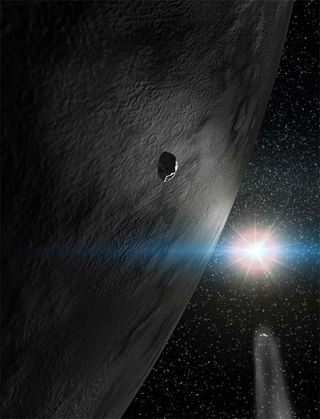 An illustration of the asteroid 24 Themis along with two small fragments that orbit with it. One of the small fragments is inert (as most asteroids are) and the other has a comet-like tail, produced by the sublimation of water ice from its surface. Scientists announced the first discovery of water ice on 24 Themis. Full Story.
(Image: © Gabriel Pérez, Servicio MultiMedia, Instituto de Astrofisica de Canarias, Tenerife, Spain)

The recent discovery of an asteroid wrapped in a layer ofwater ice has revived the possibility that some space rocks would be great potentialpit stops ? as well as destinations ? for manned or robotic explorationmissions.

If a space destination has water, that means astronautstraveling there could potentially use it for drinking and washing. But muchmore importantly, the water could be broken down into its component parts(hydrogen and oxygen) to makerocket fuel, experts say.

"Water is the main component in how you might makepropellants," said Jerry Sanders, leader of in-situ resource utilizationat NASA's Lunar Surface Systems Office at the Johnson Space Center in Houston."If you're going to go repeatedly to an asteroid, then the ability tobasically start setting up gas stations could be extremely beneficial."

Researchers announced last week that they had founddefinitive proof of frozen water, along with organic compounds, coating thesurface of the large asteroid 24Themis in the asteroid belt between Mars and Jupiter. Previously,scientists had believed that asteroids there were too close to the sun toharbor water without it evaporating away.

In addition to the practical benefit, water means that thesite may potentially be habitable to life, which boosts the asteroid'sscientific appeal as well. Although there's no sign yet that this or any otherspot in the universe hosts extraterrestrials, the presence of water is thefirst thing researchers look for when scouting out where potential alienneighbors may reside.

President Barack Obama has set the goal of sendingastronauts to a nearby asteroid by 2025. But those close space rocks would likelynot have water ice since they would be even closer to the sun than the asteroidbelt.

Even small amounts of water on the surface of a planet orasteroid can bring big benefits for visiting missions.

For manned missions, a source of water for drinking and forextracting oxygen to breathe would be good as a backup, though hopefullyclosed-loop life-support systems could recycle most of the initial supplies,Sanders said. The real payoff of water would be in the possibility of using itto make fuel, said he added.

To extract the water, astronauts or robots would collectsamples of the dirt or rock and grind them up into a powder. Then, the materialwould need to be heated ? possibly with a microwave ? to driveoff the water so it can be collected. Finally, the water must be cleaned sothat few impurities are left.

Once these steps are taken and a sample of water isavailable, actually turning it into rocket fuel isn't that hard, Sanders said.

"Actually how you convert water into fuels is a fairlyeasy and straightforward process," he told SPACE.com.

Water, or H2O, contains both hydrogen and oxygen,two of the most commonly used elements in propellant. To get to these rawbuilding blocks, water must be broken down through a process calledelectrolysis. Electrolysis units are fairly standard pieces of equipment that areoften used in life-support systems.

While a significant amount of equipment would be needed forthe whole process, ultimately the hardware would take up much less room andweight than packing all the fuel needed for the return journey to Earth, not tomention any other excursions taken after first landing on the asteroid.

"If you have to do a long trip somewhere and you have tocarry all the gas with you to go to that destination and come home, your fueltank gets larger and larger, which means your vehicle gets larger, and you needa more powerful engine to pull the load," Sanders said.

The main challenge in extracting water from an asteroidwould be dealing with the lack of gravity, Sanders said. Even places like themoon, which have 1/6 the gravity of Earth, would be easier to work onthanks to that modicum of gravitational pull toward the surface.

"Gravity helps you control where solids are and ithelps you control the movement of those kind of resources in and out of yourprocessing chamber," Sanders said. "It's not impossible to come upwith ways of moving, but it's different than how we've done it up to thispoint."

Additionally, the spacecraft would have to find a good wayto anchor securely to the surface without the help of gravity.

To find out if 24 Themis or any other asteroid is apromising spot for visiting, and initial prospecting mission is a good idea.Such a mission could take a closer look and analyze samples to determinewhether there is enough water in a usable form to merit building a space gasstation there.