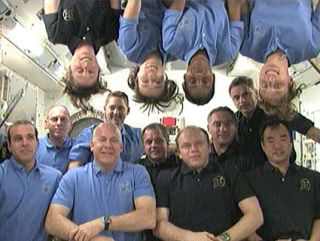 All 13 Expedition 23 and STS-131 crew members gather in the Kibo module of the International Space Station for the joint crew news conference on April 14, 2010.
(Image: © NASA TV)

CAPE CANAVERAL, Fla. - No one can escape taxes, not even astronauts flying in space.

Of the 13 astronauts flying on the linked shuttle Discovery and International Space Station, eight are Americans stuck in space as tax day arrives in the United States.

But they didn't launch into space unprepared. And unlike some Americans who avoid paying taxes, all these astronauts either paid their taxes early or filed for an extension. Some even took extra time to fill out their 2010 census forms.

"I did fill out my census form before we left, but I did have to file for an extension on my taxes," Discovery astronaut Stephanie Wilson told reporters this week.

Wilson and six other astronauts launched into space on Discovery on April 5. They arrived at the International Space Station two days later and have been delivering tons of new supplies, science equipment, spare parts and other gear ever since.

On Thursday, the shuttle astronauts will pack up the bus-sized cargo pod they hauled to the space station, use a robotic arm to pluck it from a docking berth on the outpost, then store the module in Discovery's payload bay for the trip home. The shuttle is due to land here in Florida early next week.

Discovery's pilot, U.S. Air Force Col. Jim "Mash" Dutton, is a rookie astronaut making his first spaceflight after a lifetime of dreaming for a chance to fly in space. But that dream didn't distract Dutton from the whims of the Tax Man.

"I filed in advance because I got a refund," Dutton told SPACE.com before flight.

Taxes and human spaceflight also have a long history. After all, Americans have been living in space continuously aboard the International Space Station since 2000. That's enough time for 10 tax days and two census polls.

"We've got folks on orbit 365 days a year, and we've had to deal with that a bit," explained Discovery commander Alan Poindexter, a U.S. Navy captain making his second spaceflight.

In fact, Poindexter and his crew are flying in space on the 40th anniversary of NASA's Apollo 13 moon mission -- a spaceflight that has the double distinction of being both a near-disaster and a stunning rescue. An oxygen tank exploded while Apollo 13 was en route to the moon, forcing its crew -- astronauts Jim Lovell, Fred Haise and Jack Swigert -- to abandon their mission as NASA engineers scrambled to find ways to keep them alive and return them home safely.
Apollo 13 did return home safely, a harrowing space journey that has been immortalized in books, television and on film. But at least one of them, Swigert, still had the tax man waiting.

Swigert was a late addition to the Apollo 13 crew and didn't expect to need an extension until he was assigned to the crew at the last minute. He was the backup crewmember for command module pilot Ken Mattingly, who was pulled from the Apollo 13 crew after being exposed to the German measles.

NASA doctors feared Mattingly would get sick during the flight, or worse -- infect the entire crew. Despite being grounded for Apollo 13, Mattingly never did get the measles.

But Swigert wasn't so lucky with his taxes. Mission Control broke out in laughter when he asked how to get an extension from space.

"How do I apply for an extension?" Swigert asked Mission Control when flight controllers asked the Apollo 13 astronauts if they'd done their taxes before launch. "Things happened real fast down there and I do need an extension."

SPACE.com is providing complete coverage of Discovery's STS-131 mission to the International Space Station with Managing Editor Tariq Malik and Staff Writer Clara Moskowitz based in New York. Click here for shuttle mission updates and a link to NASA TV