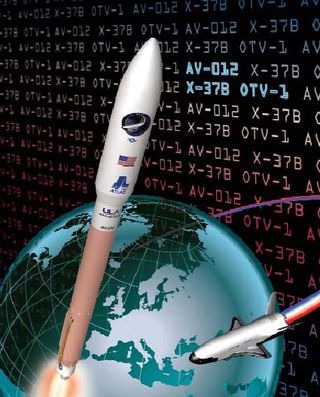 ?Ultimately, weapons couldbe delivered from a spaceplane in low Earth orbit,? Scott said, citing a ?Rods from God? scenario.That idea is akin to a lawn-dart weapon idea that uses tungsten rods lobbedfrom space to hit a cross-haired target on the ground.

?I did a story aboutthe rods concept in 1994 or 1995, based on concepts being discussed in the U.S.Air Force at the time,? Scott said. ?Fifteen years later, maybe they?re readyfor testing.?

Viewingthe X-37B as a fascinating project, and one that fuels speculation is EverettDolman, Professor of Comparative Military Studies at the School of Advanced Airand Space Studies at the Maxwell-Gunter Air Force Base in Montgomery, Alabama.

?Itis not possible to tell yet whether the program is an example of the output ofbureaucratic inertia or the beginning of something much bigger, Dolman advised.

Thevalue of a true space plane to military thinkers and planners has long been evident,Dolman suggested, from thoughts in the early 1900s to the original grandvisions for the space shuttle. Fast forward to today, in the case of the X-37B,while none of the planned missions for the space plane are public as of yet, hecontinued, a few of the potential missions are easy to conjure up.

?Regardlessof its original intent, the most obvious and formidable is in service as aspace fighter - a remotely piloted craft capable of disabling multiplesatellites in orbit on a single mission and staying on orbit for months toengage newly orbited platforms,? Dolman said. That capability ?would be atremendous tactical advantage.?

Furthermore,the small size of the X-37B, coupled with maneuverability on orbit would makeit almost impossible for non U.S. space watchers to keep an eye on itswhereabouts, Dolman said.

Evenif it were not used to engage and disable satellites, Dolman said, it could bemaneuvered up close and personal to inspect orbiting satellites at a level ofdetail currently unimaginable. ?With the anticipated increase innetworked-microsatellites in the next few years, such a platform might be thebest ? and only ? means of collecting technical intelligence in space.?

Dolmanalso sees another use for the automated X-37B. It could be pressed intoservice, he said, not only as a resupply vehicle for routine resupply ormaintenance of space platforms, even for the International Space Station as apublicly visible mission.

?Ifa reasonably-priced, reliable transport for supply and maintenance becomesoperational, a whole new set of on-orbit possibilities opens up,? Dolman noted.?What the U.S. Air Force has not had is a dedicated, secure platform forweapons research and, potentially, testing.?

Laser anddirected energy testing ? to include relaying beams ? could be done oncivilian platforms in small strengths for communications or power-generatingapplications. Still, the results needed for weapons research would beunsatisfactory and potentially compromised, Dolman said. ?All of the informationleaked about the X-37B suggests its primary function will be as a testplatform, but a test platform for what??

Whilethere will be some who suggest the X-37B is a program that just limped along,?it seems there are at least a few U.S. Air Force planners who are looking tothe future, as well as a few civilian supporters who see the value in areusable space plane, Dolman observed. ?The X-37B is a viable and importantproject whose time is past due.?

MarkGubrud is a physicist in the Laboratory for PhysicalSciences at the University of Maryland in College Park, and a proponent ofspace arms control. As a robot shuttle, he senses that the X-37B would finallygive the U.S. military flexible two-way access to space, as well as some in-planemaneuver capability in orbit.

TheX-37B is a product, in part, of the maturing of robotics, space robotics,military robotics and the military's confidence in robotics, Gubrud suggested.

?Weare seeing a partly technology-fed arms race. But the technology for spaceweapons is still quite exquisite and needs extensive development and testing,? Gubrud said. ?I don?t see the X-37 itself as a space weapon,because it is probably too expensive to use it that way,? he said, comparedwith the kind of alternatives ? smaller, more specialized space weapons ? thatthe X-37B could be utilized to test and develop.

Gubrud pointed out there is a realistic way tolimit the threat posed by the X-37 or similar vehicles produced by any country.That is, to account for their numbers and demand that they be kept either inverifiable storage or in use for declared non-weapons purposes, and that thenumbers be commensurate with their declared purposes.

Tothat end, ?basic information about the payload mass and volume, burnoutvelocity, orbital maneuver capability and remotely observable characteristics,as well as the numbers of such vehicles, should berequired to be reported,? Gubrud suggested.