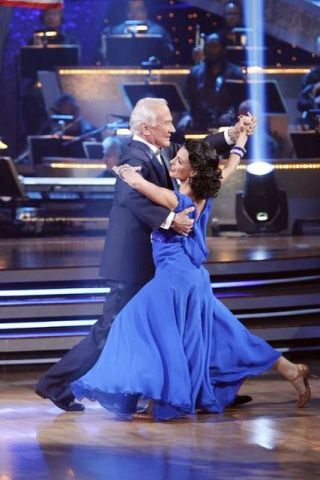 For their second dance together, Buzz Aldrin and Ashly Costa perform the Foxtrot to the song "Fly Me to the Moon" on "Dancing with the Stars."
(Image: © ABC)

The second man to walk on the moon may be the first to bedanced off stage as the first results for ABC's "Dancing with theStars" are revealed Tuesday evening.

Astronaut Buzz Aldrin's future on the reality TV show nowrests on how many fan votes he received after two weeks of live dance performancesthat the show's judges ranked as the lowest among the ten other contestants.

"How can you not be a fan of BuzzAldrin?" asked judge Len Goodman, a British professional ballroomdancer, on Monday night's show. "How difficult it is to try to criticize alegend, so I am not even going to try."

Unfortunately for Aldrin, the other judges were not equallyreserved in their critiques.

After describing Aldrin's cha-cha-chalast week as looking like the astronaut was still wearing his moon boots,Italian choreographer Bruno Tonioli ascribed Aldrin's foxtrot this week to dodging another lunar feature.

"Buzz, I have an astronomical discovery for you: Theman in the moon looks stuck in the foxtrot. It looked like you were avoidingcraters, I know you're used to it," boasted Tonioli. "Sometimes ithelps going in a straight line, if you come back, but you know, great to haveyou."

Decked out in a black tuxedo with a metallic silver bow tie,Aldrin, 80, twirled his partner, 27-year-old Ashly Costa to "Fly Me to theMoon" across a stage that did indeed have moon craters projected fromabove.

During a taped segment that was played before they took tothe floor, Aldrin revealed that he even had Costa draw out his steps similar tohow he trained for his missions.

"I've asked Ashly to draw out the steps for the foxtroton a map and it's very, very useful to me," he said. "I have to putthis in what we call . . . military topography graphics."

It was those carefully-planned steps that tripped up Aldrinwith judge Carrie Ann Inaba.

"You, for being such a courageous man, looked like youwere so afraid of stepping on Ashly's toes the whole time," she said."But nice effort and I loved the silver tie."

The three judges gave Aldrin a score of four each out of apossible ten points. That brought his two-week total to 26 out of 60, placinghim at the bottom of the leaderboard just below football player Chad Ochocinco,soap opera actor Aiden Turner and mother-of-eight Kate Gosselin.

Remarking on his low scores, Aldrin reflected, "I'lltell you, the only way is up . . . in my life."

The judges' scores, however, do not alone decide who staysand who goes. For Aldrin to dance another night,he needs to have garnered more votes from fans who voiced their support byphone, via text message and through the Web.

"We'll hang in there for as long as we can," saidAldrin, "right to the glorious end."

VisitcollectSPACE.com throughout Buzz Aldrin's time on "Dancing withthe Stars" for the latest episode updates and photographs.