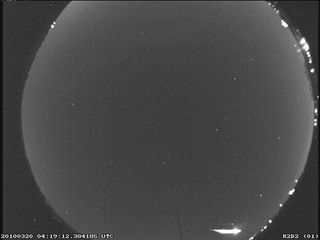 This photo is a still taken from a NASA Allsky camera video taken of a meteor fireball over western Alabama on March 19, 2010. The meteor was about the size of a soccer ball and completely incinerated before reaching the ground, scientists say.
(Image: © NASA/Marshall Space Flight Center.)

A bright fireball that lit up the sky above parts of Alabamalast week was caught by NASA cameras as it streaked over the southeasternUnited States.

The fireball was caused by the death plunge of a meteor aboutthe size of a soccer ball as it burned up in Earth?s atmosphere on Friday,March 19, at 11:19 p.m. local time whitle flying over western Alabama. Two NASA cameras, onebased at the agency?s Marshall Space Flight Center in Huntsville, Ala.,recorded a the meteor?s fiery demise as it happened.

?At its brightest, it was brighter than the crescent moon,?Bill Cooke, a meteor expert at the Marshall center, told SPACE.com in ane-mail. ?This gives a mass of about 10 kilograms and a diameter of [about] 20centimeters - a decent size!?

The meteor was first caught on film at an altitude of about45.3 miles (72.9 km) and burned up while it was still about 20 miles (32 km)above the Earth [seemore meteor photos]. The space rock was not big enough to result in ameteorite ? that is a meteor that survives the scorching heat of enteringEarth?s atmosphere and hits the ground, sometimes carving out bigholes in the planet.

The meteor was streaking across the sky at about 42,500 mph(that?s 12 miles every second) when it was picked up an Allsky meteor-trackingcamera at the Marshall Space Flight Center, as well as a similar camera inChickamauga, Ga., that is also operated by the center.

Cooke said the two cameras allow scientists to comparedifferent views of the same fireball in order to triangulate its path acrossthe night sky. While there are other meteor-tracking networks across the UnitedStates, NASA?s system at Marshall uses timestamps and global positioningsatellite data to coordinate when fireballs are observed.

?We have plansto deploy two more units to regional schools in the very near future, and thenwill extend the network into the mid-Atlantic states,? Cooke said.

Fireballs like the one caught on film are relatively common,Cooke said. Most times, like Friday?s event, the meteors put on a spectacularlight show, but burn up before any piece can reachthe ground.

Most of the events aren't seen by most people for severalreasons, among them: Most meteors are visible only at night, when not as manypeople are outside; the majority fall over the ocean, since Earth is two-thirdscovered by water. But for those who routinely go out and look up, and assumingclear skies away from urban light pollution, fireballs are not so rare.

?We see fireballs (meteors brighter than the planet Venus)almost every clear night,? Cooke said. ?Events like the one above are seenabout once every couple months.?