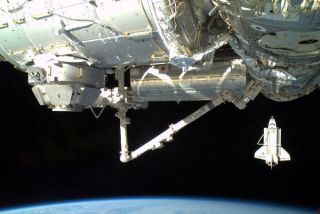 The space shuttle Endeavour backs away from the International Space Station in this photo taken after the two spacecraft undocked Feb. 19, 2010. Japanese astronaut Soichi Noguchi posted the snapshot, which includes the station's new Tranquility module and Cupola lookout (top left), to his Twitter page.
(Image: © NASA via Twitter.)

Astronauts aboard NASA's space shuttle Endeavour are preparing their spaceship for a planned landing in Florida Sunday night, but low clouds and rain may keep them in space an extra day.

Endeavour is returning to Earth from a two-week trip to the International Space Station, where its six-astronaut crew added a stunning seven-window lookout dome and a room the size of a small bus.

The shuttle is due to land Sunday night at 10:16 p.m. EST (0316 Monday GMT) at NASA's Kennedy Space Center in Cape Canaveral, Fla.

But there's a chance of rain within 30 miles (48 km) of the runway — a violation of NASA's shuttle landing rules. The cloud layer may also be too low to allow Endeavour to land, said LeRoy Cain, head of Endeavour's mission management team.

Skywatchers on Earth have one last chance to spot the shuttle and space station before Sunday's landing attempt. Both spacecraft can easily be spotted with the unaided eye, weather permitting, but only if observers know where to look. [How to spot the space shuttle and station.]

NASA will call up a backup runway at Edwards Air Force Base in California for landing attempts on Sunday and Monday, but the weather there is also iffy. Cain said he is optimistic the weather will cooperate for the first attempt in Florida.

Endeavour is returning home to end a 14-day mission to the International Space Station that added the new Tranquility module and a stunning space observation deck, called the Cupola. The $100 billion orbiting lab is now nearly complete after 11 years of space construction.

The new additions cost more than $409 million and took three spacewalks to install.

Shuttle commander George Zamka and his crew packed away some final items and tested Endeavour's flight control surfaces and thrusters today to prime the shuttle for landing.

Endeavour launched Feb. 8 and spent nine days at the space station before undocking Friday night. It has two chances to land in Florida Sunday night, and one opportunity in California.

The shuttle actually has enough supplies to remain in space until Tuesday, but NASA wants to save that last extra day in case of an unexpected technical glitch.

There is also a third landing option — a backup runway at White Sands Space Harbor in New Mexico. That landing strip, however, is not currently being called up for Endeavor's crew. Only one shuttle mission has ever landed there in NASA's 29 years of shuttle flight.

Two separate weather systems are headed for the Kennedy Space Center, posing the landing concerns, Cain said. Rainy weather is also expected in California, though the forecasts are changing dynamically, he said.

"We're a long way away, meteorologically speaking, and so there are a lot of ways that this could turn out," Cain said.

While mission managers weigh Endeavour's landing options, engineers are analyzing data from the shuttle crew's final heat shield inspection. The inspection, which looks for new damage caused by space junk or micrometeorites, has been a standard chore for astronauts since heat shield damage brought down the shuttle Columbia during re-entry in 2003.

So far, Endeavour's heat shield is in good shape, though the astronauts did see a few nicks in some cockpit windows. Cain said the dings are tiny and pose no risk to the shuttle and its crew.

Endeavour's STS-130 mission is the first of NASA's five final shuttle flights before the space agency retires its three-orbiter fleet in the fall.