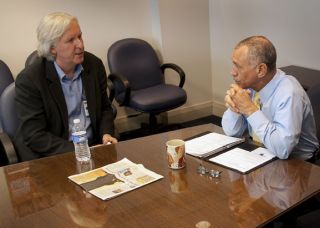 The pair discussed science education, and howto engage the public in scientific exploration, among other subjects.

Cameron, who formerly served on the NASAAdvisory Council, has had a life-long interest in space and science, asevidenced by several of his other films. "Aliens" concerned spacetravel and extraterrestrial life forms. "The Abyss" dealt withunderwater military and industrial operations, while two Terminator moviesfeatured futuristic lethal cyborgs.

All of these films represented huge boxoffice successes, and could very well inspire the next generations of spacescientists and engineers.