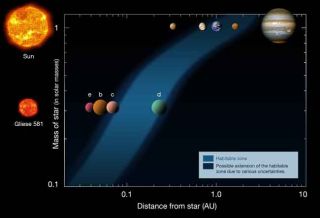 This diagram shows the distances of the planets in our solar system (upper row) and in the Gliese 581 system (lower row), from their respective stars (left). The habitable zone is indicated as the blue area. The smallest known exoplanet to date is Gliese 581 e, which is nearly twice Earth's mass.
(Image: © ESO)

The planetsits in a star system about 80 light-years from Earth in the constellationHercules and orbits its parent star once every four days or so. It is thelatest extrasolar planet to join the ranks of the so-called ?Super-Earths,? worlds slightly larger than our own.

?This isquite a remarkable discovery,? said astronomer Andrew Howard of the University of California at Berkeley. ?It shows that we can push down and find smaller andsmaller planets.?

Howardannounced the planet?s discovery today at the 215th meeting of the AmericanAstronomical Society in Washington, D.C.

Thesmallest extrasolar planet known today is called Gliese 581 e. It has a massthat is nearly twice that of Earth and orbits a planet-filled starsystem about 20.5 light-years away in the constellation Libra.

Howard andcolleagues discovered the new planet by observing the ?wobble? in its parentstar. Researchers at the California Institute of Technology, Yale University and Penn State University participated in the study.

Theirtried-and-true planet detection method measures the effects of a planet?sgravity on its parent star. As the planet passes behind its stellar parent asseen from Earth, its gravity tugs slightly on the star, causing the starlightto shift to a redder wavelength in the light spectrum. When the planet passesin front of the star, the effect causes the light to appear bluer.

More than400 extrasolarplanets have been discovered using the same method. But most of thoseplanets are giants similar in mass to Jupiter.?

Howard saidit has been the long-standing goal among astronomers to find low-mass planetssimilar to Earth, though their size makes them difficult to detect.

Planethunter Geoff Marcy, who is also of the University of California at Berkeley and participated in Howard?s study, created the Eta-Earth Survey for Low MassPlanets to hunt for Super-Earths. So far, the survey has found two suchplanets, Howard said.