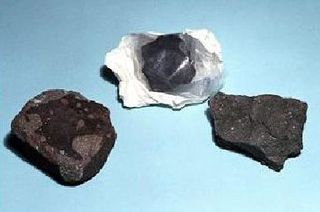 The solid planets in our solar system are made mostly of silicates. Rock, basically. A new study shows that planets around some other stars might be made mostly of carbon instead. Deep inside such worlds, where pressures are intense, the carbon would make layers of diamonds that could be miles thick.

The rich-sounding worlds are modeled after a certain type of space rock, known as the carbonaceous chondrite, which are thought to be broken bits of asteroids. Many of them have been collected on Earth.

"These meteorites contain large quantities of carbon compounds such as carbides, organics, and graphite, and even the occasional tiny diamond," Marc Kuchner of Princeton University said in a teleconference with reporters Monday evening from an extrasolar planet conference in Aspen.

The idea builds on other reasonable theories.

The planets in our solar system formed from a disk of gas and dust left behind from the Sun's formation. In regions where there was extra carbon or a lack of oxygen, carbon compounds like graphite and carbides would condense out of the mix, instead of stone.

Carbides are a ceramic used to line the cylinders of engines. They can take the heat of being very close to a star.

Kuchner and his colleague, Sara Seager of the Carnegie Institute of Washington, figure that concept fits nicely with discoveries of planets around other stars, including some that are surprisingly close to their host stars -- much closer than Mercury is to the Sun. Carbon planets could survive at high temperatures near a star, they say.

Another set of candidates for diamond-laden planets are the dark worlds orbiting a dead, fast-spinning star known as PSR 1257+12. These planets -- three of them are roughly Earth-sized -- might have been formed by the destruction of a carbon-rich star, Kuchner said.

Carbon planets might also be common near the center of the galaxy, where stars are known to contain more carbon than out here on the spiral arms where our solar system resides, some 26,000 light-years from the galactic middle.

"There's no reason to think that extrasolar planets will be just like the planets in the solar system." Kuchner said. "The possibilities are startling."

Carbon planets might have smoggy atmospheres laden with carbon dioxide, and a surface covered with tar-like precipitation. "A little bit like Los Angeles," Kuchner said.

Future telescopes might identify some of these offbeat orbs by noting these characteristics and a lack of water.

One day, diamonds could lose their allure by sheer overstocking. The entire galaxy is growing richer in carbon as generation after generation of stars produce heavier elements. In the future, Kuchner and Seager contend, all planets might form as carbon worlds.