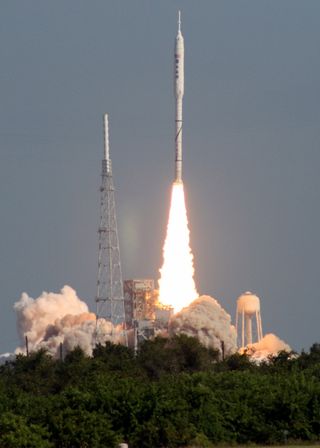 The Ares I-X moon rocket prototype roars off Launch Pad 39B at NASA's Kennedy Space Center in Florida in this view of the successful Oct. 28, 2009 test launch.
(Image: © Roger Guillemette/SPACE.com)

The $445 million suborbital AresI-X rocket, NASA?s first prototype of the vehicle it plans to carry humansto orbit after the space shuttles retire, blasted off Oct. 28 from the KennedySpace Center in Florida. It soaredeastward into the sky, peaked at about 28 miles (45 km) altitude, then thesolid-rocket first stage separated from its dummy second stage and dropped intothe ocean as planned.

But two of three parachutes failedto deploy to soften the spent first stage's splashdown into the ocean asplanned. Consequently, the booster hit the water harder than expected, causinga huge dent and other damage. Ultimately, since the parts aren't intended to bereused, mission managers said the malfunction wasn't a major problem and theywere able to gather all the data they needed.

"We're still investigating what happened there andwhy," said Marshall Smith, chief of the System Engineering and IntegrationOffice for the Ares I-X mission, during a Thursday news conference.

Mission managers suspect that the chutes began to deployearlier than planned, and thus took on more force than they were designed for, resultingin their failure.

The towering327-foot (100-meter) Ares I-X rocket was loaded with more than 700 onboardsensors to gather data about the booster's trajectory and performance.

Among the promising signs revealed in the report were thefact that the rocket shook and rolled much less than some models predicted,which had originally been a concern for the Ares I design concept.Additionally, early visuals raised some fears that the first and second stagesmight have hit each other, or "re-contacted," after separation, butdetailed analysis revealed that they didn't.

Additionally, three connectors failed to detach during theseparation of two pieces of the segment connecting the first and second stages.This was somewhat expected though, and the two pieces separated anyway, rippingthe connectors, because of the strong force pulling them apart.

Another odd finding was the measurement of the structuraldamping, which is basically how much the structure of the rocket is able toresist vibrations, during the test launch. The booster experienced about20percent less damping than models had predicted.

"I can't tell you whether it's bad or good ? it justdoesn?t match," Smith said.

The engineers plan to investigate that issue and others asthey continue to review the data, which is still in preliminary stages ofanalysis. Almost all the data was recovered from the rocket when teamsretrieved the stage from the ocean, though for some reason the data at the endof the flight wasn't recorded properly to the disk. But mission managers saidthey had other versions of that data and were more concerned with the ascentthan descent anyway.

"We've got loads of that data, so were not superconcerned with getting that," Smith said.

NASA is also beginning to plan the next Ares I flight test,which is currently targeted for 2012.