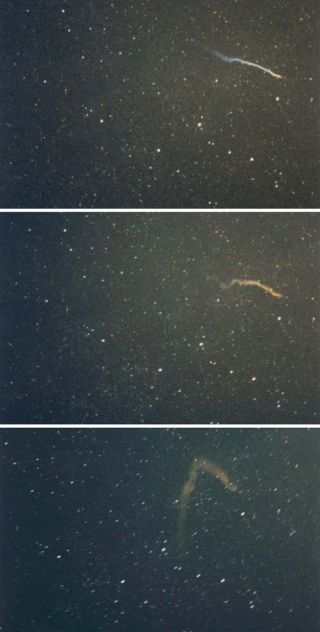 Joe Rao snapped these images of the after-effects of a single Leonid meteor on Nov. 17, 1996 from Brodheadsville, PA. His Nikormatte Camera was aimed toward the "W" of Cassiopeia. He was not quick enough to snap the cable release when a brilliant fireball streaked through the sky, but this train lasted more than 5 minutes. The first image was taken about 15 seconds after the fireball appeared. The second image was made about 1 minute after the fireball appeared, and the last image was made 5 minutes after the meteor first showed up. Wind in the upper atmosphere distorted the trail.
(Image: © Joe Rao)

When people hear about an impending meteor shower, their first impression may be of a sky filled with shooting stars pouring down through the sky like rain. Such meteor storms have actually occurred with the annual Leonid meteor shower of November, such as in 1833 and 1966, when meteor rates of literally tens of thousands per hour were observed.

In more recent years, most notably 1999, 2001 and 2002, lesser Leonid displays of up to a few thousand meteors per hour thrilled skywatchers.

This year will be not set any records, but the Leonids – set to peak early Tuesday morning, Nov. 17 – should offer a better-than-average display.

The Leonid meteors are debris shed into space by Comet Tempel-Tuttle, which swings through the inner solar system at intervals of 33.25 years, looping around the sun then heading back into the outskirts of the solar system. With each visit the comet leaves behind a trail of dust in its wake.

Plenty of the comet's old dusty trails litter the mid-November part of Earth's orbit and the Earth glides through this debris zone every year. But predicting exactly what's out there is tricky.

On special occasions we'll pass directly through an unusually concentrated dust trail, or filament, which can spark a meteor storm resulting in thousands of meteors per hour. That indeed is what transpired in 1999, 2001 and 2002. Since Comet Tempel-Tuttle comet passed near the sun (and in doing so crossed Earth's orbit) in 1998, it was in those years immediately following its passage that the Leonids put on their best show.

But the comet has since receded out to some 1.8 billion miles (2.9 billion km.) from the sun, having taken most of those dense filaments of dust with it. That's why this year, during the predawn hours of Nov. 17, when the Leonids traditionally should be at their most numerous, we now expect to see no more than 10 meteors per hour, even with the promise of this year's excellent viewing conditions thanks to a New moon.

Still – for some parts of the world, a far more prolific Leonid show could be in the offing this year. For although Comet Tempel-Tuttle is now far removed from the inner solar system, independent studies by several noted meteor scientists suggest that the Earth will pass through several notable trails of meteor activity in 2009. We'll list these encounters below in chronological order, including the prime regions of visibility.

The first cloud of comet dust was released from the nucleus of Tempel-Tuttle back in the year 1567. North America will be turned toward the constellation Leo when these particles begin pelting the upper layers of our atmosphere, some 80 to 100 miles (130 to 160 km.) above us. Earth's encounter with the comet dust is going to be brief – possibly no more than several hours long.

Unfortunately, we won't be going directly through the center of cloud, but rather skim through its outer edge on Nov. 17, chiefly between about 4:30 and 10:30 GMT. As a consequence, the meteor rate is not expected to get much higher than 20 or 30 per hour (on average about one meteor sighting every two or three minutes). Still, this is about two to three times the normal Leonid rate.

At the beginning of this window, it will still be dark across Europe and western Africa with Leo high up in the southeast sky, but within an hour the sky will be brightening as sunrise approaches, soon putting an end to meteor watching.

North Americans – especially those living near and along the Atlantic Seaboard – will be able to watch for Leonids from after 1 a.m. local time right on until the first light of dawn, which comes soon after 5 a.m. local time.

Those in the eastern U.S. and Canada are especially favored because Leo will be high in the southeast sky between 3:30 and 5:30 a.m. EST, just before Earth is expected to exit the meteor cloud. For the West Coast, this translates to 12:30 to 2:30 a.m. PST, when Leo is much lower down in the eastern sky.

From Hawaii, Leo will be coming up above the east-northeast horizon right around the time that Earth is exiting the meteor cloud (12:30 a.m. Hawaii Time). However . . . this circumstance could lead to the appearance of a few long-trailed Earth-grazing meteors, due to meteoroids that skim along a path nearly parallel to Earth's surface.

Although the overall meteor numbers are expected to be modest at best, the particles that produce them might be larger than the usual flecks of dust that comprise the Leonid swarm. Recall that this cloud of comet particles was released into space in 1567. When such "comet bits" circle the sun for many hundreds of years, the tinier (dust grain) material tends to be pushed away from the sun and dispersed by the pressure of solar radiation. Conversely, because they are relatively unaffected by radiation pressure and leave the comet nucleus with less velocity than their smaller brethren do, the larger pebble-to-marble sized particles tend to linger for a much longer time.

The result could be meteors that are predominantly bright. Watch for the possibility of catching sight of a fireball or bolide (a meteor that silently explodes like a strobe along its path). About half might leave luminous trains lasting anywhere from a few seconds to a few minutes. Indeed, catching sight of even one such meteor will make the vigil of a cold November night worthwhile!

The "Main Event" in 2009 is expected to take place when the Earth has rotated about 12 to 14 hours after passing through the first round of comet dust from 1567. Astronomers Jeremie Vaubaillon (France), Mikhail Maslov (Russia), David Asher (Ireland), and Bill Cooke and Danielle Moser (NASA's Meteoroid Environment Office/MEO) are all in agreement that material that was ejected from the nucleus of Tempel-Tuttle during the years 1466 and 1533 will likely produce a very strong meteor display over much of Asia, India and Indonesia.

There is a high level of confidence that an outburst of bright meteors will occur. This is based mainly on the fact that last year, Earth encountered material that was shed by the comet in 1466 produced about 100 Leonids per hour. This year, Earth will cross through that same 1466 stream again, but much closer to the center of that particular comet cloud. In addition, at about the same time, the Earth will also be passing through dust ejected by the comet in 1533. The consensus forecast among the astronomers for this year suggests rates of anywhere from 130 to perhaps 300 Leonids per hour, but trying to hash out a specific number when two different streams literally coalesce with each other makes a forecast much more difficult to make; it could even be less or it could be much more.

The Earth is expected to pass through the densest parts of the two dust clouds at around 21:40 GMT on Nov. 17, though heavy meteor activity is possible for about an hour or two on either side of this time.

From much of Asia, India and Indonesia, the corresponding calendar date will be Nov. 18. It will be 12:40 a.m. in Moscow; 3:10 a.m. in Mumbai; 4:40 a.m. in Jakarta and 5:40 a.m. in Beijing, Unfortunately from Tokyo and across Australia, the sun will have already risen, effectively hiding the meteor outburst. Conversely, from Europe it will be after sunset on Tuesday evening, but although it will be nighttime, Leo will have not yet risen above the horizon, so the outburst will not visible.

As a late addition, Jeremie Vaubaillon also suggests that some Leonid activity "might" be generated by a very old trail of comet debris dating back to the year 1102. This material, however, is more than 900 years old and has made no less than 27 revolutions around the sun.

As a result, it could very well be almost completely dispersed and not provide any activity at all.

But at 3:29 GMT on Nov. 18, Earth will pass within 30,000 mi. (48,000 km) of the center of this trail. "The position of this very old trail is highly uncertain," notes Vaubaillon, "but if confirmed it may produce a noticeable activity. As a consequence, any event related to this one is highly valuable." Europeans, as well as western and central Africa are in the best viewing position should there be anything to see.

Preparing for your meteor watch

No two observers prepare for a meteor vigil the same way. It helps to have had a late afternoon nap, a shower, and to wear all fresh clothing.

Be sure to keep this in mind: at this time of year, meteor watching can be a long, cold business. Expect the ambient air temperature to be far below what your local radio or TV weathercaster predicts.

Watching a meteor shower consists of lying back, looking up at the sky . . . and waiting.

When you sit quite still, close to the rapidly cooling ground, you can become very chilled. You wait and you wait for meteors to appear. When they don't appear right away, and if you're cold and uncomfortable, you're not going to be looking for meteors for very long! Therefore, make sure you're warm and comfortable. Heavy blankets, sleeping bags, groundcloths, auto cushions, and pillows are essential equipment.

Warm cocoa or coffee can take the edge off the chill, as well as provide a slight stimulus. It's even better if you can observe with friends. That way, you can keep each other awake, as well as cover more sky.

Keep in mind that any local light pollution or obstructions like tall trees or buildings will reduce your making a meteor sighting. Give your eyes time to dark-adapt before starting. Probably the best bet is to rest on a lawn lounge, all the way back, so you can look up and see the whole sky. When you see a streak, mentally run it backwards across the sky. Do the same with the second and third and note where their paths cross. Right there will be the Sickle of Leo, and that's where the Leonid radiant will be. The constellation of Leo does not come fully into view above the east-northeast horizon until after 1 a.m. local time, so that would be the best time to concentrate on looking for Leonids.

Lastly, because the Leonids are moving along in their orbit around the sun in a direction opposite to that of Earth, they slam into our atmosphere nearly head-on, resulting in the fastest meteor velocities possible: 45 miles (72 km) per second. Such speeds tend to produce meteors with hues of white, blue, aquamarine and even green.