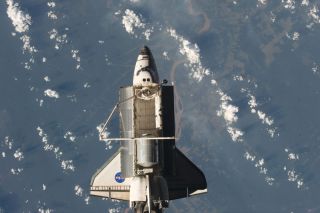 Backdropped by a cloud-covered part of Earth, Space Shuttle Discovery (STS-128) is featured in this image photographed by an Expedition 20 crew member on the International Space Station soon after the shuttle and station began their post-undocking relative separation on Sept. 8, 2009.
(Image: © NASA.)

NASA hasordered astronauts aboard space shuttle Discovery to switch to a backup runwayin California for their planned landing Friday due to persistent storms inFlorida that made a return to their home port impossible.

Discovery hadtwo chances to set down today on its primary runway at the Kennedy Space Center(KSC) in Florida, but thunderstorms near the shuttle?s landing strip kept thespacecraft at bay. The astronauts now hope to land at 8:53 p.m. EDT(0053 Sept. 12 GMT) at the Edwards Air Force Base in California.

?We do appreciateeverybody that worked the weather so hard in Florida and we appreciate thefamilies making the trip down,? shuttle commander Rick Sturckow radioed MissionControl after hearing the news. ?But it doesn?t look like it?s going to workout for today so we?ll set up for Edwards.?

Discovery isreturning to Earth to end a 14-day delivery mission to the InternationalSpace Station. The astronauts delivered a new crewmember to the station, aswell as tons of supplies and science gear for the outpost?s six-person crew.

Shuttleentry flight director Richard Jones activated the backup runway at the EdwardsAir Force Base in California for today?s landing attempts, giving Discovery atotal of four tries (two in Florida and two in California) because weather conditions at both sites were expected to deteriorate on Saturday.

NASAprefers to land space shuttles in Florida when possible because it is theorbiter fleet?s home port. Florida landings also avoid the extra week oftransport time and $1.8 million in turnaround costs required to ferry shuttleshome from California for their next mission. Discovery is due to fly to thespace station again early next year to deliver more supplies.

Discoverylaunchedlate Aug. 28 and left the station with enough supplies to last throughFebruary. Among the major delivery items were an air-scrubbing device, a newastronaut bedroom, a pair of powerful science experiment racks and a treadmillnamed after TV comedian Stephen Colbert.

Thetreadmill was named after the comedian host of Comedy Central?s ?The ColbertReport? as a consolation prize after he won the naming rights to a new spacestation room in an online poll earlier this year. NASA opted to name the newroom Tranquility after the Apollo 11 moon base, but rechristened the treadmillthe Combined Operational Load Bearing External Resistance Treadmill (COLBERT) forStephen Colbert. The exercise gear is in more than 100 pieces and will beassembled by station astronauts later this month.

Kopra isreturning home after nearly two months aboard the station and is bringing home BuzzLightyear, a 12-inch Disney toy that has been in orbit for 15 months aspart of an educational program. A tickertape parade at Walt Disney World inFlorida awaits Lightyear upon his return to Earth.