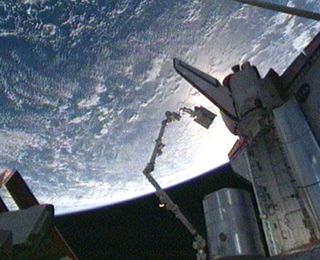 Thederelict remains of an old European rocket zipped close by the InternationalSpace Station and shuttle Discovery Friday, but not close enough to pose a riskto the spacecraft or their astronaut crews.

At its closestapproach, the space trash was less than a mile (1.3 km) from the space station -about a mile closer than previouslyreported - as it passed from left to right ahead of the orbitinglaboratory, but did not endanger the spacecraft.

?The flightcontrol team [is] continuing to monitor that debris, but again it did pass asexpected and is no concern to the orbiting complex,? said NASA spokespersonNicole Cloutier-Lemasters in the daily mission commentary after the debris flew by.

The spacejunk, part of an Ariane 5 rocket that launched two satellites into orbit in2006, flew harmlessly past the linked station-shuttle complex at about 11:07a.m. EDT (1107 GMT) as the 13 astronauts inside prepared for a day off.

NASAwatched the approaching space junk for days to make sure it would not hit the spacestation or shuttle, or force the spacecraft to fire thrusters in order tododge. By early Thursday, the chances of the debris coming too close forcomfort were nil, the space agency said.

?Wedetermined the chance of collision was zero,? NASA spokesperson Bill Jeffs toldSPACE.com at the time.

The rockettrash is large by space debris standards: about 204 square feet (19 squaremeters) in area. It is flying in an extremely elliptical orbit that reachesnearly 20,000 miles (32,000 km) at its high point.

LateWednesday, NASA considered several options to move the dockedshuttle and space station to put more distance between them and the approachingspace junk. At one point, the agency considered starting a Thursday spacewalkearly or delaying it a day in order to perform the move.

But byThursday, it became clear that the space debris posed no risk to the stationand shuttle. The spacewalk planned for that day went on as planned, withastronauts replacing a massive ammonia coolant tank for the space station?scooling system.

It was thesecond of three spacewalks planned for Discovery?s 13-day mission, which isdelivering nearly 8 tons of supplies, science equipment and a treadmill namedafter comedianStephen Colbert to the space station.

Today, theastronauts are expected to take a half-day off and continue moving cargobetween the space station and shuttle. They will also speak with reporters onEarth and prepare for the mission's final spacewalk, which is set for Saturday.