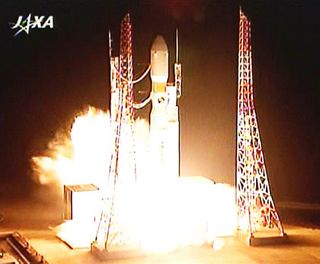 The Japanese H-2 Transfer Vehicle lifts off from the Tanegashima Space Center in Japan on Sept. 10, 2009 EDT (Sept. 11, 2009 Local Time) on its maiden flight to the International Space Station.
(Image: © NASA TV/JAXA)

Theinaugural H-2Transfer Vehicle (HTV-1) blazed into a predawn sky above its seaside launchpad at the Tanegashima Space Center in southern Japan, where the local time was2:01 a.m. Friday at the time of liftoff. It was still Thursday in the UnitedStates, where NASA officials at space station Mission Control in Houston andother centers monitored the launch.

The launchoccurred at 1:01 p.m. EDT (1701 GMT), just hours before the planned eveninglanding of NASA?s space shuttle Discovery and a crew of seven astronauts inFlorida. The shuttle is returning from its own delivery mission to the spacestation and is scheduledto land at 7:05 p.m. EDT (2305 GMT), weather permitting.

Built forthe Japan Aerospace Exploration Agency (JAXA), HTV-1 blasted off atop a brand newH-2B rocket, the country?s most powerful booster to date. About 15 minutesafter liftoff, the cargo ship separated from the rocket?s second stage andbegan the week-long trek to the space station.

If all goeswell, the cargo ship should arrive at the orbiting laboratory Sept. 17 after aseries of rendezvous and abort system tests.

Japan?s HTVspacecraft is about 33 feet (10 meters) long, 14 feet (4.4 meters) wide anddesigned to haul up to six tons of supplies to the space station. It is coveredin solar panels for power and designed to fly on the equally new H-2B boosterrocket, which is derived from Japan?s workhorse H-2A rocket family.

The $220million HTV spacecraft has beenin development in Japan since 1997 and JAXA has spent about $680 millionoverall to bring it to reality, JAXA officials have said. It is the latest in aseries of international cargo ships from Russia and Europe that haul vitalsupplies to the space station.

?It?s anamazing vehicle and it?s a pleasure to have it in the fleet,? said MikeSuffredini, NASA?s space station program manager.

Suffredinisaid there are a number of spaceflightfirsts that come with Japan?s HTV. It is the first vehicle since NASA?s spaceshuttle that can haul supplies and equipment for both the inside and exteriorof the space station.

The HTV isalso the first space freighter to fly to the American side of the space stationand the first one not designed to dock itself at the station. Instead, anastronaut inside the orbiting lab will grab the 16 1/2-ton spacecraft using thestation?s robotic arm. That capability, NASA officials said, is vital sincefuture commercial cargo ships are expected to be grappled in the same way.

The cargoship is Japan?s newest contribution to the space station. JAXA built thestation?s massive laboratory Kibo, which means ?Hope? in Japanese. Constructionof that $1 billion lab, which is as large as a tour bus, was completed in July.It has its own robotic arm, small airlock, external science porch and an atticstorage room.

For itsinaugural mission, the HTV-1?s pressurized section has been packed with about 31/2 tons of supplies that include food, laptop computers and a smaller roboticarm for the Kibo lab to be used for delicate operations. An external payloaddrawer is loaded with two experiments to be attached to the Kibo module?sporch.

If theHTV-1?s week of rendezvous tests go well, the spacecraft will be directed tofly within about 33 feet (10 meters) of the station so NASA astronaut NicoleStott can grab it with the outpost?s robotic arm.

?Myunderstanding of the hardware is that it?s going to be a very stable vehicle,?Stott said earlier this month. ?I think the excitement of it is that it reallyis this new capability for us.?

JAXA willwatch over the HTV mission from its Tsukuba Space Center in Tsukuba, Japan,which is also home to the agency?s Kibo mission operations center.