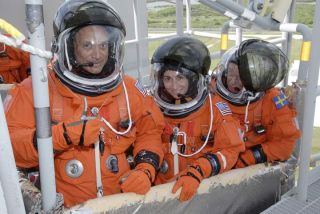 Sevenastronauts climbed aboard NASA?s space shuttle Discovery Friday for a vitaldrill to practice escaping from the spacecraft at the launch pad and go overplans for their late August blast off.

Clad inbright orange pressure suits, the astronauts strapped into Discovery at NASA?sseaside Kennedy Space Center in Florida and rehearsed the last few hours beforeliftoff before scurrying out the shuttle?s hatch to a set of baskets designed tozip down a 1,200-foot slide wire away from the launch pad in the eventof an emergency.

Discoverywill also ferry NASA astronaut Nicole Stott to the space station, where shewill replace fellow spaceflyer Tim Kopra as a member of the outpost?s six-personcrew. Stott joined NASA?s astronaut corps after years working to readyshuttles for flight as an operations engineer at the Kennedy Space Center.

?I?m justthrilled to be able to do it, and I?m looking forward to having it happen,?Stott told reporters of the upcoming flight in a Thursday briefing at thelaunch pad.

Friday?slaunch dress rehearsal and escape drill also made an impression on Discovery astronautJose Hernandez, who celebrated his 47th birthday during the training session.

?Great way to spend a b-day!? Hernandez wrote on his Twitterpage. Hernandez is one of several astronauts who will be using themicroblogging site during the shuttle flight. He is posting updates in Englishand Spanish.

BeforeDiscovery can launch toward the space station, engineers must close out work toreplace a faulty valve on one of the shuttle?s two solid rocket boosters. Thevalve was replaced this week, with the final clean up work slated to beperformed over the weekend, Thomas said.

Engineersare also studying whether modifications will be required for some of the foam-coveredramps on Discovery?s external tank. Somefoam debris popped free from similar so-called ice frost ramps when NASA?sshuttle Endeavour launched toward the space station in July. Engineers havebeen studying the foam loss events to determine what changes, if any, arerequired for future fuel tanks.

?They'redoing some studies and looking into that,? Thomas said. ?Right now we'reprogressing toward launch.?

Since theramps in question can?t be reached while Discovery is at the launch pad, if afix is ultimately required the shuttle would have to return NASA?s cavernousVehicle Assembly Building, adding a substantial delay to its mission.

Discoveryis currently targeted to launch Aug. 25, but could be ready to fly a dayearlier if preparations continue to go smoothly and no fuel tank fixes arerequired. NASA has until the end of August to launch the shuttle mission beforeit would have to stand down until October due to a flurry of space traffic atthe station.

Discoverywould likely have to wait until the completion of both those flights if it cannotlaunch by month?s end.