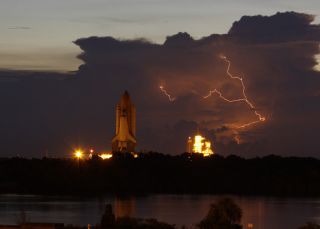 Lightning makes a dramatic background and slows the rollout of space shuttle Discovery to Launch Pad 39A at NASA's Kennedy Space Center in Florida on Aug. 4, 2009. First motion of the shuttle out of the Vehicle Assembly Building was at 2:07 a.m. ET.
(Image: © NASA/Justin Dernier)

A WhiteHouse panel tasked with reevaluating NASA?s plans for future space explorationhas begun culling a list of potential options - one that ranges from stayingthe current course to taking direct aim at sending humans to Mars.

The10-member committee overseeing the Review for U.S. Human Space Flight Plans hastrimmed a larger list of 3,000 options down to about seven general scenarios,which it plans to cull even further before presenting them to President BarackObama later this month.

?We haveour work cut out for us,? the committee?s chairman Norman Augustine, formerLockheed Martin CEO, said Wednesday during a televised meeting in Washington,D.C.

NASA?scurrent plan is to retire its aging space shuttle fleet in 2010 aftercompleting construction of the International Space Station and replace it witha newOrion vehicle. Orion and its Ares I rocket are slated to begin operationalflights in 2015 as NASA?s larger plan to return humans to the moon by 2020. Aheavy-lift Ares V rocket is also planned to launch lunar landers and otherheavy cargo.

Committeemember Edward Crawley, an MIT professor, said that only three of the potentialscenarios under review by the committee take into account NASA?s explorationbudget, now pegged at about $80 billion total through 2020. That?s about $28billion less than what the agency expected when it chose the Orion and Aresrocket plan.

?This would be robust utilization of the space station, butallows exploration to move off into the later distance future,? said Crawley,who leads the committee?s subgroup studying destinations for human spaceexploration. ?It?s a limiting case.?

The ?dash? option is aimed at launching manned missionsbeyond low-Earth orbit as fast as possible, ?therefore it makes no sense for usto do anything other than rely on international partners and commercial[companies] for crew access,? Crawley said.

Theremaining scenarios under the committee?s review would likely exceed or equalthe current budget planned for NASA?s exploration goals, Crawley said. Theyrange from a more direct repurposing of space shuttle technology to sendinghumans straight to Mars, though all could set the stage for potential in-orbitrefueling capabilities.

?This would prepare us to take the next step to Mars, havingspent some time on the moon,? Crawley said.

With theirhandful of scenarios in hand, the spaceflight review committee plans to meetAug. 12 for one final public meeting to discuss the final options beforesubmitting a final report at the end of the month. Some committee membersWednesday said NASA, and the United States in general, should choose to tacklethe most challenging projects in space.

Bohdan Bejmuk,a former Boeing manager leading one of the committee?s subgroups, said thatwhile flying in space is always hard, getting to low Earth orbit is slightlyeasier than reaching the moon, or moving out toward Mars. Buying commercial launchservices to fly crew and cargo to low Earth orbit, he explained, wouldfree NASA?s top minds to target more lofty goals.

?NASA hasbrilliant people," Bejmuk said. "Get attention of thesebrilliant people on the harder tasks, and think of buying the easier tasks from[commercial] industry. ?NASA would show off their skills by doing the hardstuff?I think that process would elevate NASA in stature in America.?