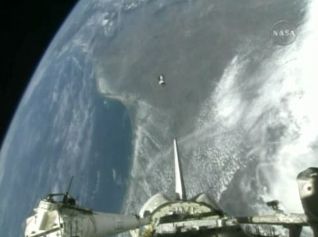 Astronautsaboard the space shuttle Endeavour successfully deployed two sets of tinysatellites Thursday as they received word they were cleared to come home.

The sevenastronauts aboard Endeavour jettisoned the two satellite experiments to demonstrate newtechnology and study Earth?s atmosphere Thursday as they gear up for a plannedmid-morning landing in Florida tomorrow. Engineers also gave the shuttle?s heatshield a clean bill of health today, setting the stage for theFriday landing, Mission Control said.

Polanskyand his crew are returning to Earth to wrap up a grueling 16-day constructionflight to the International Space Station. Endeavour astronauts replaced one memberof the station?s crew and performed five complex spacewalks to deliver spareparts and install a newexperiment porch on Japan?s Kibo giant lab during their 11 days docked atthe orbital outpost.

Endeavouris also ferrying Japanese astronaut Koichi Wakata back to Earth to end what,for him, will be a 4 1/2-month mission in orbit. Wakata arrived at the spacestation in March on a different space shuttle and is Japan?s first long-termresident at the orbiting lab. He watched over Japan?s $1 billion Kibo lab andperformed some unconventionalexperiments during the flight before being replaced by NASA astronaut TimKopra, who arrived on Endeavour.

Polanskyand his crew are slated to land at 10:48 a.m. EDT (1448 GMT) at NASA?s KennedySpace Center in Florida to end their marathon mission to the station. NASAflight director Bryan Lunney said the weather looks promising for landing,though there is a chance of rain and thunderstorms within 30 miles of theshuttle runway.

Thefirst of the two satellite experiments deployed Thursday was DRAGONsat, a pair of small satellites that launched from Endeavour?s payload bay as part of a study to demonstrate autonomous rendezvous anddocking technologies, as well as global positioning systems. The satelliteswere built by students at the University of Texas at Austin and Texas A&MUniversity.

Later, theastronauts jettisoned two perfect spheres that make up the Naval ResearchLaboratory?s ANDE 2 mission. The two spheres are each 19 inches across, buthave different masses. By watching differences in their orbits, researchers willstudy the density of Earth?s atmosphere.

WhileEndeavour?s astronauts prepared for landing, the six-man crew of the InternationalSpace Station tackled another glitch with an air-scrubbing device inNASA?s Destiny laboratory.

A shortcircuit in one of the device's 12 heater pads appeared to be at fault, missionmanagers said. Station astronauts spent much of Thursday repairing theair scrubber, which is one of two used to clean carbon dioxide out of thestation?s atmosphere.

?We?reconfident that it will activate and we?ll be back up to full capacity in thecarbon dioxide removal operations,? said Mike Suffredini, NASA?s space stationprogram manager, in an afternoon briefing.

The spacestation relies on American and Russian air scrubbers to continually refresh theits internal atmosphere. Both are required to support the station?s full-sixman crew. If the repairs to NASA?s air scrubber are unsuccessful, the stationhas a stockpile of lithium hydroxide canisters that can also be used to purifythe station?s cabin.

Thatstockpile could support the station?s six-person crew for up to two months if required,Suffredini said. NASA?s space shuttle Discovery, meanwhile, is already expectedto deliver a new American air-scrubbing device to the station in late August aspart of a preplanned supply mission.

Thatmission is slated to launch on Aug. 25.