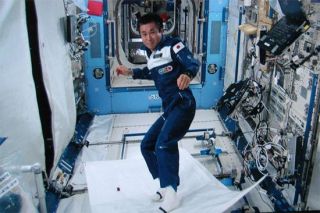 Japanese astronaut Koichi Wakata of JAXA rides a "flying carpet" during a series of experiments to demonstrate life in weightlessness aboard the ISS.
(Image: © JAXA.)

A set of high-tech Japanese underwear has passed the ultimate smell test in space.

Japanese astronaut Koichi Wakata put the new underwear, which is designed to keep foul odors down in space, and other garb to an extra-long endurance test during his 4 1/2-month stay aboard the International Space Station.

"I wore it for about a month and my station crewmembers never complained for that month, so I think the experiment went fine," Wakata told the Associated Press Thursday in a televised interview.

Wakata is returning to Earth on NASA's space shuttle Endeavour, which is due to land Friday after an 11-day stay at the space station. Before leaving the station, Wakata told Japanese dignitaries, students and reporters that he spent two months in all wearing the experimental space clothing designed by the Japan Aerospace Exploration Agency.

Called J-Wear, the souped-up space duds include underwear, shirts, socks, pants and shorts made from a special anti-bacterial fabric engineered to repel static and neutralize odors.

"We're going to go beyond the moon someday," said Mike Suffredini, NASA's space station program manager, in a televised briefing Thursday. "And little things like this will seem like really, really big things when you're far away from Mother Earth."

Japan's experimental underwear made their space debut when Japanese astronaut Takao Doi wore the clothing during his two-week flight in March 2008. But Wakata's mission is to first to put the clothes to a month-long odor test. He packed them in his luggage before leaving the space station so they can be analyzed by scientists on Earth.

"I'm returning that, and we'll see the results after landing," said Wakata, who watched over Japan's giant Kibo lab while aboard the station. He also preformed a series of fun experiments to show Japan's public how astronauts can fold clothes, ride a "flying carpet," enjoy weightlessness and use eyedrops in space.

Wakata and his Endeavour crewmates are due to land in Florida at 10:48 a.m. EDT (1448 GMT) Friday, weather permitting. The astronauts spent today checking their spacecraft's flight control systems and deploying two sets of small satellites for researchers on Earth.