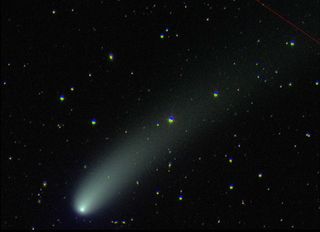 Some of thecomets that make their way to Earth?s neighborhood from the frigid outerreaches of the solar system likely follow a different route than previouslythought, new modeling suggests.

The study'sfindings, detailed in the July 31 issue of the journal Science, are good newsfor our planet (especially in light of Jupiter'srecent impact): Comets from this region should rarely cross Earth's orbit,and so aren't a collisionconcern.

In turnthese rare encounters mean that these comets are unlikely to be the causes ofpast mass extinction events.

So-called long-periodcomets (those with highly elongated orbits that take them hundreds orthousands of years to circle the sun) were long thought to come from the outerregion of the Oort Cloud.

The OortCloud is a remnant of the nebula from which the solar system formed some 4.5billion years ago. It encircles the solar system from a point about 93 billionmiles from the sun (1,000 times the distance from Earth to the sun) and extendsto about three light-years away (a light-year being the distance it takes light to travel in one year, about 5.9 trillion miles).

The Oort Cloudis thought to contain billions of comets, most of which are far too small anddistant to be seen ?even with powerful telescopes.

Butgravitational nudges from a passing star can send the comets on a path to theinner solar system, where astronomers can finally get a glimpse of theselong-exiled bodies.

There areabout 3,200 known long-period comets (the most well-known of which was CometHale-Bopp, which was visible for much of 1996 and 1997).

Scientiststhought that very few of these comets came from the inner Oort Cloud, and thatthey only did so when a passing star made a particularly close fly-by, settingoff a comet shower in events that play out over millions of years.

"Itwas thought the long-period comets we see just tell us about the outer OortCloud," said lead author of the study Nathan Kaib, a graduate student ofthe University of Washington in Seattle.

Scientistshad thought that most of the comets coming from the inner Oort Cloud would beejected from the solar system by gravitational interactions with Saturn andJupiter, which act like body guards for the inner solar system planets.

"Theycut down on the number of bodies reaching Earth-crossing orbits," Kaibsaid.

But afterrunning computer models of the evolution of comet clouds for 1.2 billion years,Kaib and his colleague found that comets from the inner Oort Cloud could slippast the protective barrier of Jupiter and Saturn and reach an Earth-crossingorbit.

The newmodeling suggests that a substantial portion of observable long-period cometsactually come from the inner, not the outer, Oort Cloud.

While theactual number of comets in the inner Oort Cloud is unknown, Kaib and hiscolleague were able to make an estimate of the highest possible number ofcomets in the region.

With thismaximum, they could further estimate the number of comets likely to have struckEarth during the last 500 million years. They determined that it should be nomore than two or three comets, which would have been part of the most powerfulcomet shower in that time span.

Three majorimpacts are known to have occurred nearly simultaneously (within a million orso years of each other) at around the same time as a massextinction event about 40 million years ago. If that relatively minorextinction event was caused by a shower of inner Oort Cloud comets, it waslikely the most intense comet shower since the fossil record began, and so itis unlikely that inner Oort Cloud comets were responsible for other extinctionevents (though other impactors may still be the culprits).

"Thattells you that the most powerful comet showers caused minor extinctions andother showers should have been less severe, so comet showers are probably notlikely causes of mass extinction events," Kaib said.

So whilesome comets slip through the Jupiter-Saturn barrier, most don't, and those thatdo aren't likely to hit Earth. Some might hit Jupiter and Saturn themselvesthough.

Whether ornot Jupiter's bruise last week was caused by an impacting long-period cometisn't known for sure, but "it's certainly a possibility," Kaib toldSPACE.com.

Kaib's workwas funded by the National Science Foundation and NASA.