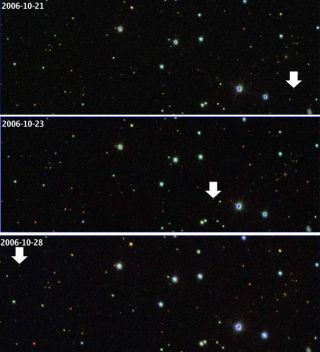 The comet-like object SQ372 changes positions as it moves in its orbit, while the positions of the stars that are much farther away stay fixed. The Sloan Digital Sky Survey showed the object on October 21 (top), 23 (middle) and 28 (bottom).
(Image: © A. Becker and the SDSS.)

Ahuge comet-like object has been spotted inside the orbit of Neptune. Theobject, at least 30 miles wide, is on the return leg of a 22,500-year journeyaround the sun, astronomers announced today.

Cataloguedas 2006 SQ372, the interloper is just over two billion miles (3.2 billion km) fromEarth, though its elongated trek takes it to a distance of 150 billion miles (241billion km), or nearly 1,600 times the distance from the Earth to the sun.

"It'sbasically a comet,but it never gets close enough to the sun to develop a long, bright tail ofevaporated gas and dust," said Andrew Becker of the University ofWashington. Comet tails form when solar energy boils material off a comet.

Theobject is not a threat to Earth, which is good. A comet that size would causeglobal devastation. The space rock that contributed to the demiseof dinosaurs 65 million years ago was about 6 miles (10 km) wide. The cometHale-Bopp, which put on a spectacular display in the late 1990s, is about 31miles (50 km) in diameter. Yet many comets are just a mile or two wide.

Becker'steam found 2006 SQ372 by applying a computer searching algorithm to data taken fromthe Sloan Digital Sky Survey II (SDSS II), which is tasked with finding supernovaexplosions billions of light-years away to measure the expansion of theuniverse. In the survey, the Apache Point Observatory telescope scanned thesame long stripe of sky, an area 1,000 times larger than the full moon in thesky, every clear night in the fall of 2005, 2006 and 2007.

Asto how 2006 SQ372 got its unusual orbit, University of Washington graduatestudent Nathan Kaib, another member of the discovery team, has some ideas basedon his computer simulations of the object.

"Itcould have formed, likePluto, in the belt of icy debris beyond Neptune, then been kicked to largedistance by a gravitational encounter with Neptune or Uranus," Kaib said."However, we think it is more probable that SQ372 comes from the inneredge of the Oort Cloud."

TheOort Cloud is a huge spherical cloud surrounding the solar system. It extends about18 trillion miles (30 trillion kilometers) from the sun and was first proposedin 1950 by Dutch astronomer Jan Oort.

Thediscovery was reported today in Chicago, at an international symposium titled "TheSloan Digital Sky Survey: Asteroids to Cosmology." The researchers plan tosubmit details of the finding for publication in the Astrophysical Journal.