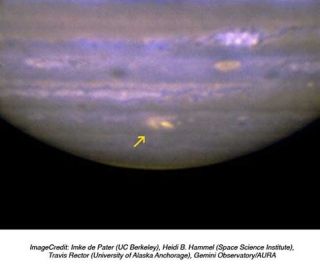 This mid-infrared composite image was obtained with the Gemini North telescope on Mauna Kea, Hawai'i, on 22 July at ~13:30 UT with the MICHELLE mid-infrared spectrograph/imager. The impact site is the bright yellow spot at the center bottom of Jupiter's disk.
(Image: © UC Berkeley, Space Science Institute, University of Anchorage, Alaska, Gemini Observatory/AURA)

Therecent bruising Jupiter received from a cosmic impact is a violent reminderthat our solar system is a shooting gallery that sometimes blasts Earth.

Still,what are the odds of a cosmic impact threatening our planet?

"Ifan object of about the same size thatjust hit Jupiter also hit Earth ? it was probably a typical cometary objectof a kilometer or so in size (0.6 miles) ? it would have been fairlycatastrophic," explained astronomer Donald Yeomans, manager of NASA'sNear-Earth Object program office at the Jet Propulsion Laboratory in Pasadena,Calif.

Scientistshave ruled out the chancesof an Earth impact for all of these 784 large NEOs. Still, lesser objectsalso pose a risk, and researchers estimate more than 100 large NEOS remain tobe found.

Billionsof years ago, impacts were far more common. Our moon retains a record of thepummeling it and Earth took: the moon's craters remain, while on Earth, most scarsof ancient impacts have been folded back into the planet or weathered away.

Today'ssolar system is far less crowded, and in fact Jupiter, having more mass andgravity, scoops up a lot of the dangerous objects, as does the sun.

Currentlyjust one NEO of all the objects scientists are tracking poses any significantchance of hitting the Earth ? 2007 VK184. If this roughly 425-foot-wide (130meters) asteroid hit our planet, it would strike with an energy of roughly 150million tons of TNT, or more than 10,000 times that of the atombomb dropped on Hiroshima.

Roughly100 telescopic observations made so far suggest that 2007 VK184 has a1-in-2,940 chance of hitting Earth 40 to 50 years from now. However, if thepast is any guide, further observations to refine computations of its orbitvery likely will downgrade its probability of hitting Earth to virtuallynothing, Yeomans said.

Ofremaining concern are the NEOs that we do not see. Researchers suspect about156 large NEOs 1 kilometer in diameter or larger remain to be found, and whenit comes to dangerous NEOs in general, "when we get down to 140 meters(460 feet) or larger diameter objects, we think we've discovered about 15percent of them, and with 50 meters (164 feet) or larger diameter, we'vediscovered less than 5 percent of them," Yeomans explained.

Onaverage, an NEO roughly a half-mile wide or larger hits the Earth roughly every500,000 years, "so we're not expecting one anytime soon," Yeomansexplained.

"For500 meters (1,640 feet), we're talking a mean interval of about 100,000years," he added. "When you get down to 50 meters, the mean intervalis about 700 years, and for 30 meters (98 feet), about 140 years or so, but bythen you're getting down to a size where you won't expect any ground damage, asthey burn up in the atmosphere at about 25 meters (82 feet) in diameter andsmaller, probably for an impressive fireball event."

Whenit comes to truly monstrousNEOs some 10 kilometers (6.2 miles) or larger, of the size thought to havehelped kill off the dinosaurs, "that's a 100 million year event, and infact, I don't think there is anything like that we see right now," Yeomanssaid. "The largest near-Earth object that can actually cross the Earth'spath, Sisyphus, has a diameter of 8 kilometers (5 miles), and the largest thatis termed a potential hazard is Toutatis, which has a diameter of approximately5.4 km (3.35 miles)."

Thereare currently four teams worldwide actively looking for both large and smallNEOs, Yeomans said. "We're concentrating on the large ones for now, buthopefully with the next generation of search, we'll be more efficient infinding the smaller objects, to find 90 percent of the total population ofpotential hazards larger than 140 meters," he added.

Keeping aneye on NEOs might not just be healthy for humanity, but also help lead us outinto space.

Furthermore,asteroids and comets are among the objects that have changed the least sincethe birth of the solar system roughly 4.6 billion years ago, and might revealvital clues behind the mysterious process.

"Theymay well have delivered the water and carbon-based molecules to Earth thatallowed life to form, so they're extremely important for study in thatdirection," Yeomans added.