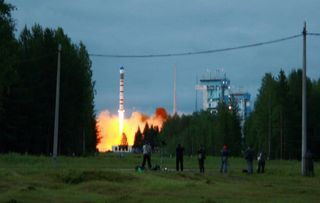 The 106-foot-tall launcher lifted off at0357 GMT (11:57 p.m. EDT Monday) from the Plesetsk Cosmodrome in northernRussia, according to the Itar-Tass news agency.

The two-stage rocketdelivered the payloads to orbit about an hour later, the Novosti news agencyreported.

The Kosmos 3M booster,making its first flight of the year, was believed to be carrying a Parusnavigation satellite for the Russian Defense Ministry. Parus satellites circleEarth in 620-mile-high orbits over the poles.