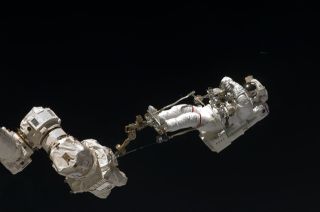 Spacewalking astronaut Dave Wolf stands at the top of the International Space Station's robotic arm during a July 20, 2009 spacewalk, the second of five during the STS-127 mission to the outpost.
(Image: © NASA.)

NASA is reworking plans for the last two spacewalks for astronauts visiting the International Space Station as the outpost's crew prepares to add the first experiments to the orbiting lab's new Japanese porch today.

While some of the 13 astronauts aboard the linked station and shuttle Endeavour install the new Japanese experiments, astronaut Chris Cassidy and crewmate Tom Marshburn, his spacewalking partner on the next two excursions, will hold a planning conference with mission planners to go over the changes.

A problem with the air-scrubbing gear in Cassidy's spacesuit forced NASA to cut a Wednesday spacewalk short while he and crewmate Dave Wolf were replacing old solar array batteries outside the International Space Station. At no point was Cassidy in danger, but Mission Control ordered the spacewalkers inside as a precaution.

The astronauts managed to remove three of the old batteries and install two new ones before wrapping up. But NASA had hoped they could have replaced four of the six old batteries.

Now all four of the remaining batteries will be added to the fourth of the five spacewalks for Endeavour's flight on Friday.

Any incomplete chores, like setting up cameras on the Kibo porch and unstowing an external spare parts platform - tasks that were left unfinished from the first two spacewalks - can be pushed to the mission's fifth spacewalk on Monday, mission managers have said. The fifth spacewalk was filled with non-critical tasks that can be replaced by more important ones, they added.

While the final two spacewalks are replanned, Thursday will be a banner day in space for Japan.

The country will see the robotic arm aboard its $1 billion Kibo lab at the station in operation for the first time after a battery of tests by Japanese astronaut Koichi Wakata, who represents the Japan Aerospace Exploration Agency (JAXA) and has lived aboard the station since March.

Wakata and other astronauts will use the robotic arm to move the three new payloads from a carrier to the porch extending outward from the tip of the Kibo lab, which is a massive module the size of a tour bus.

"So it'll be really exciting," said Endeavour shuttle commander Mark Polansky in a NASA interview. "We're glad that Koichi will be able to do that since it's JAXA hardware."

Polansky and his six crewmates delivered the new experiments, as well as their cargo carrier and the Kibo porch, over the last week as part of their 16-day construction flight to the space station aboard Endeavour.

The three payloads moving to the porch today include: an inter-orbit communications system used to downlink images and video from the station, an experiment to study the effect of the station's space environment on electronics and devices, and an X-ray observatory to scan the night sky.

The communications system uses a dish antenna to beam images, data and voice communications to Earth by relaying them from the station to a Japanese satellite that then sends it to Japan's Kibo mission control center at the Tsukuba Space Center.

The final payload to be moved today is the X-ray observatory, called MAXI. It has two X-ray detectors that will be used to scan the sky once every 90 minutes to study emissions from distant astronomical objects.

Wakata has said that Japan has spent two decades building Kibo and its experiments, so there is much anticipation surrounding the first operational use of its arm and new experiments.

"It's over 20 years since Japan started to work on this project," he said in a NASA interview. "I think taxpayers deserve to see us get to the next level, which is the utilization of the International Space Station."