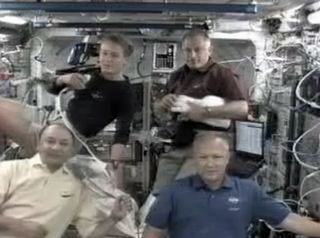 Sneezes canpack a wallop on Earth, but for an astronaut in a spacesuit they can also makea mess of things, a veteran spacewalker said Tuesday.

Six-timespacewalker Dave Wolf, currently flying on the International Space Station,said astronauts can?t stop fromsneezing inside their spacesuits, and there?s no way to blow your nose.

?That?s avalid question because I?ve done it quite a few times, most recently yesterday,?Wolf said, as he answered a video question sent to NASA via YouTube.

The trick,Wolf said, is havinggood aim, something every spacewalker learns in training. After all, no one wants to sneeze on their spacesuit helmet.

?Aim low,off the windshield, because it can mess up your view and there?s no way toclear it,? said Wolf, who spent nearly seven hours working outside the stationon Monday and will do it again tomorrow. ?That?s how you do it.?

Wolf?streatise on space sneezing was part of a high-tech question-and-answer sessionby Endeavour shuttle astronauts currently working at the International SpaceStation. The shuttle launched to the station last week. The questions weresubmitted well in advance to shuttle commander Mark Polansky and his crew viaYouTube and the microblogging Web site Twitter.

Polanskygoes by the name @Astro_127 on Twitter as part of an effort to engage thepublic about Endeavour?s 16-dayflight to the International Space Station. Questions were sent in from allover the world from schoolchildren, teenagers and adults alike.

?I?ll bethe first to admit that I didn?t know a tweet from a Twitter,? Polansky said ofhis tweeting before flight. ?I?ve learned that there?s a whole community outthere that loves this stuff.?

He is thesecond astronaut to tweet from space, but others have promised to follow onfuture flights. Polansky and his crew are working through a marathon flight todeliver an experiment porch and new crewmember to the space station.

Olivia, 15,from Connecticut asked the astronauts if they liked their job and what it wasreally like to livein space.

?It isgreat to be an astronaut. It is essentially is the bestjob on Earth,? said Payette, adding that astronauts spend most of theirtime training and supporting missions from Earth. ?When we do get to go, it?s extraordinary;it is a real privilege.?

Astronautshave to put up with living with a lot of people in a confined space - there are13 people aboard the station now, the most ever - but floating inweightlessness and the views of Earth more than make up for it, she said.

Theastronauts were also asked if they would ever want to take their families alongfor a ride in space if it was safe to do so.

?We?d be sohappy if we could take them with us,? said Payette, who has two young sons. ?Ifit was a possibility, we?d really like to have our kids playing in microgravitywith us and our friends to share and watch the Earth pass by.?