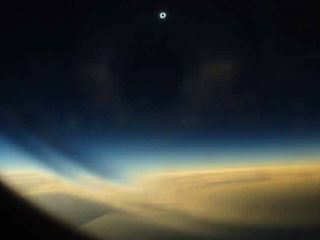 The Aug. 1, 2008 solar eclipse 30-seconds into totality. The sun's corona, or atmosphere, shines high above the Arctic sky, while the moon's shadow casts a dark pall on the overcast below.
(Image: © Joe Rao)

Theastronomical event of the summer, if not for this entire year, occurs thisWednesday, July 22: A total eclipse of the sun visible in parts of India and China.

In fact,this will be one of the very best solar eclipses of the 21st century thanks tothe near-coinciding of three events:

First, themoon arrives at perigee ? the nearest point in its orbit relative to Earth ? onJuly 21; a distance of 222,128 mi (357,463 km). Back on July 3, the Earth wasat its farthest point from the sun (called aphelion). So while in someconfigurations the moon might barely cover the sun, this time the moon willappear 8-percent larger than the sun in terms of angular size, which is what wesee in the sky.

Second, themoon will arrive at new moon phase on July 22.

And third,just 75-minutes after arriving at new phase, the moon reaches the descendingnode of its orbit, a point where it can come directly between the Earth and thesun cast its dark cone of shadow (called the umbra) upon the Earth's surface.The end result will be the solar eclipse with the longest duration of totalityuntil the year 2132.

The path ofthe moon's dark umbral shadow, from where the panoply of phenomena associatedwith that magic word "totality" can be seen, will first touch theEarth over the Arabian Sea and Gulf of Khambhat (formerly the Gulf of Cambay),roughly between Ahmadabad to the north and Mumbai to the south.

The shadowthen sweeps northeast across central India. The path of totality is a narrowswath, yet in crossing India, it could be visible to at least 13-million people(probably a very conservative estimate). The population centers range in sizefrom the 4 million inhabitants of the metropolitan area of Surat ? practicallyon the eclipse center line ? to the 130,000 in the city of Darjeeling,internationally famous for its tea industry and the Darjeeling HimalayanRailway, a UNESCO World Heritage Site, down to countless smaller communitiesand hamlets.

Unfortunately,monsoon conditions typically prevail during July and the chances of getting aclear view of the sun is only 15 percent, based on climate records.

The moon'sdark shadow will also sweep over the base of the Himalaya range in India, the Hindu Kingdom of Nepal, and Bhutan and will pass a scant 75 miles (121 km) south of thesummit of Mount Everest where 97-percent of the sun's diameter will be covered.The umbra will also race over northern Bangladesh, extreme eastern India and southern and central Tibet.

The umbrawill then cut a west-to-east path across the middle of the People?s Republic of China, the most densely populated region on Earth. In fact, four of China?s ten largest cities are inside the totality zone. Among the many large cities thatwill experience totality, is Shanghai, the largest in the People?s Republic andwith a population of over 14 million, recognized as the sixth largest city inthe world. And yet, within the sprawling metropolitan region that encompassesthe municipality of Chongqing ? also inside of the totality path ? there areestimated to be nearly 32 million people!

Certainly,when the umbra sweeps through here beginning at 01:13 UT (9:13 a.m. local timein China), more people will be experiencing the spectacle of a total solar eclipse at one moment then at anytime in recorded history!

Chengou(population nearly 10 million) and Wuhan (over 7 million) are also in the pathof total eclipse. All told, at least 85-million ? perhaps the actual figure iscloser to 100 million people . . . will be plunged into darkness as the core ofthe moon?s shadow races through China. Prospects for clear weather in China isabout 30 to 40-percent, but offsetting these modest statistics for fair weatheris the probability for haze and industrial smoke, creating smog, especially inShanghai.

Afterdeparting China, the umbra moves out over the East China Sea, eventuallypassing over some of the Ryukyu (or Nansei) Islands of Japan which form anarchipelago extending southwestward from Kyushu towards Taiwan. About 200 miles (325 km) east-southeast of Iwo Jima is the point of greatesteclipse. The umbra attains a maximum width of 161 miles (259 km), with totalityon the center line reaching a peak of 6 minutes 39 seconds, with the sun almostdirectly overhead at an altitude of 86-degrees in the sky.

Many cruiseships are expected to congregate around this area on eclipse day.??

Thereafter,the umbra moves on to the southeast, its overall width gradually diminishing,its velocity slowly increasing and the duration of totality correspondinglydiminishing. During mid afternoon, the shadow will pass over some of the Marshall and Gilbert Islands. Interestingly, its final landfall is the island of Nikumaroro. There is also a hypothesis that in July 1937 Amelia Earhart and FredNoonan landed and died on Nikumaroro after failing to find Howland Island during the final stages of their ill-fated World Flight.

Uponcrossing the International Date Line going east, the eclipse date transitionsfrom July 22 back to July 21. The totality path finally comes to its end at4:18 UT in the South Pacific Ocean amidst the northern group of the Cook Islands.

Thevisibility zone for the associated partial eclipse will include much of centraland eastern Asia.

Eclipsesrecur in a cycle known as the saros; one saros cycle is equal to 18-years, 11and one-third days (give or take one day).

Hawaii, which was crossed by the totalitypath of the saros predescessor of this eclipse in July 1991, will see a smallpartial eclipse toward sunset. And a very small section of Australia, namelythe northern and eastern portion of the Cape York Peninsula, juts just farenough into the moon's penumbral shadow to allow for small dent to appear onthe lower right edge of the midday sun.

For maps depictingthe zone of visibility of both the partial and total stages, including alisting of 385 local circumstances for selected cities, go tohttp://www.eclipse.org.uk/eclipse/0412009/.

IMPORTANT:To look at the sun without proper eye protection is dangerous. Even if you arein the path of the total eclipse you will need to protect your eyes during thepartial phases. Learn safe viewing here.

The nexttotal eclipse of the sun will be less than a year from now, on July 11, 2010.The umbral shadow will pass chiefly over the open ocean waters of the SouthPacific, but will also make contact with Mangaia ? the second largest and mostsoutherly of the Cook Islands, a number of small atolls of the TuamotuArchipelago and later still along the track, the legendary Easter Island.

Finally,just as the shadow path is coming to its end, it makes landfall in SouthAmerica along the rugged shoreline of southern Chile; finally slipping off theEarth?s surface in southern Argentina. At its peak, the moon will blot out thesun for 5 minutes 20 seconds.

NorthAmericans must wait a bit longer for their chance at a total solar eclipse. OnAug. 21, 2017, the moon's shadow will sweep coast to coast across thecontiguous United States, from Oregon, southeastward to South Carolina. It willbe the first total solar eclipse for the mainland U.S. since Feb. 26, 1979.

Joe Raoserves as an instructor and guest lecturer at New York's Hayden Planetarium. Hewrites about astronomy for The New York Times and other publications, and he isalso an on-camera meteorologist for News 12 Westchester, New York