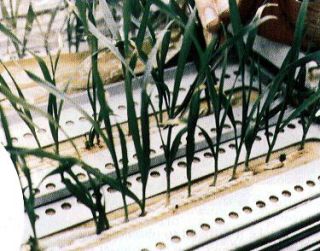 Does a sandwich on Mars taste different?

The answer could be no, according to new research that found long-term spaceflight exposure doesn't change later generations of wheat seeds.

Molecular biologist Robert Ferl of the University of Florida and colleagues studied wheat seeds descended from plants that flew on the Russian Mir space station. The progenitor plants were in space for 167 days in 1991. When they were brought back to Earth, the plants gave rise to viable offspring seeds.

After four generations of plants were grown from the seeds, the researchers analyzed gene expression in the descendant wheat plants as a sensitive measure of potential lasting effects of spaceflight. They looked at thousands of genes and found no significant changes in how those genes were expressed between their test plants and a control group of plants whose forebears were never in space.

"We can find no difference between plants with spaceflight in their heritage or not," Ferl said. "This says you can send plants up and bring them back down and they can be the same."

Ferl said the findings offered promising evidence that growing plants on other worlds might not be that hard. People should be able to pack up a bunch of seeds for their favorite foods, and after an extended microgravity journey, land on another planet and grow the seeds without ill consequence.

Previous research found that the weightless environment of spaceflight isn't a serious impediment to plant growth, though plants do often grow differently in microgravity - sometimes even taller, without gravity to pull them down.

"Plants, while they are in orbit, do exhibit changes in gene expression because that is a different environment," Ferl said.

But no one had yet tested whether any changes occurring in the plants during their spaceflight experience were passed on to future generations. This new study, published in the May 2009 edition of the journal Astrobiology, found this does not seem to be the case.

That doesn't mean there aren't other challenges to transporting and growing plants on other planets.

For one, while plants are in space and on other planets, they could be exposed to strong radiation from the sun and cosmic rays. On Earth, we are blocked from the worst of this radiation by our protective atmosphere and magnetic field.

The average journey to Mars would take six months (180 days), and then the plant seeds would be exposed to higher levels of radiation while on Mars due to the red planet's thinner atmosphere.

"I do think accumulated radiation damage over time could become an issue," Ferl said.

Dealing with radiation danger is a top priority for scientists planning future space exploration missions, because humans as well as plants are vulnerable to damage from energetic radiation. Engineers must design strong shielding for both space ships and planet habitats.

Another difficulty may be what kind of soil to grow the plants in.

While some necessary minerals may already exist on other planets that can be used for agriculture, other vital plant nutrients might have to be carried over from Earth. Because shipping heavy materials via rocket is expensive, as many materials as possible must be mined or created in the new environment.

Mars soil is rich in sulfur, and it is unknown at this time if seeds from Earth would prosper or fail in the alien red soil. Plants on Earth also rely on a rich microbial diversity within the soil to carry out many functions. Mars, as far as we know, has no such organisms in its soil, so the plant-friendly soil microbes would probably need to be transported to Mars along with the seeds.