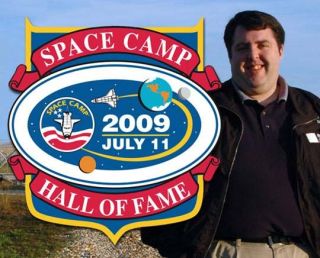 Space Camp will honor collectSPACE.com editor and founder Robert Pearlman and two others this weekend during a ceremony for the 2009 class of its Hall of Fame.

Pearlman, whose selection in part recognizes his past 10 years developing collectSPACE.com - a SPACE.com partner and contributor - into the leading website for space history enthusiasts, attended Space Camp and Space Academy programs six times between 1987 and 1992. Twice during that experience he was awarded the "Outstanding Trainee" award, the highest individual honor offered by the program.

Crediting Space Camp as helping steer his career path, Pearlman has worked for and helped lead several space interest groups and companies, including the Students for the Exploration and Development of Space (SEDS), the National Space Society (NSS), Space Adventures, Ltd. and Space.com. His prior websites have included the first built for Apollo 11 moonwalker Buzz Aldrin, the educator's guide to Tom Hanks' HBO miniseries "From The Earth To The Moon" and the award-winning Ask An Astronaut.

The three will be celebrated during an induction ceremony to be held Saturday, July 11 at 4:00 p.m. at the U.S. Space and Rocket Center's Davidson Center for Space Exploration in Huntsville, Ala. Retired space shuttle commander Robert "Hoot" Gibson will serve as emcee for the induction, to be followed by a dinner in the inductees' honor.

A silent auction and after hours party featuring the music of Microwave Dave and the Nukes will end the evening's planned events.

Opened in June 1982 with a handful of youngsters who slept in sleeping bags on the museum floor and practiced flying into space with cardboard replicas, today Space Camp has had more than 500,000 campers work with realistic, full scale space shuttle simulators, conducting experiments during simulated shuttle inside International Space Station modules built and provided by NASA.