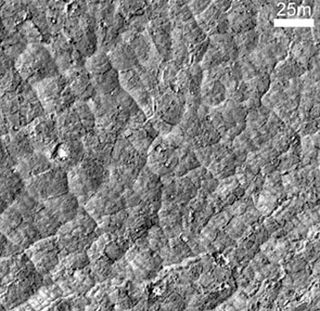 The weatheron Mars was much balmier in the recent past than scientists have previouslythought, according to a new interpretation of the formation of certainlandforms on the surface.

The findingcould have implications for the possibility of finding signs of life onMars.

Ampleevidence has been found to show that liquid water once covered parts of theMartian surface in the early history of the planet several billion years ago,but whether water flowed more recently has been less certain. Several studiesin recent years have started to point to possible evidence of more recent waterflow though.

Forexample, a system ofgullies suggests the most recent period of water flow was only 1.25 millionyears ago. Another recent study found that rivers might haveflowed on the Martian surface within the last billion years.

Balme'sanalysis indicates that the landforms he examined formed by the melting ofice-rich soils during "freeze-thaw" cycles that continued until asrecently as 2 million years ago. The pictures show polygonally patternedsurfaces, branched channels, blocky debris and mound/cone structures. Thesefeatures are similar to landforms on Earth in areas where permafrost is melting.

Permafrostis ground that remains frozen for years or even millennia, such as in the Arctic, but which can melt if the climate changes.

"Thefeatures of this terrain [on Mars] were previously interpreted to be the resultof volcanic processes. The amazingly detailed images from HiRISE show that thefeatures are instead caused by the expansion and contraction of ice, and bythawing of ice-rich ground," Balme said. "This all suggests a verydifferent climate to what we see today."

All of thelandforms observed are in an outflow channel, thought to have been active asrecently as 2 million to 8 million years ago. Since the landforms exist within,and cut across, the pre-existing features of the channel, this suggests thatthey too were created within this timeframe.

"Theseobservations demonstrate not only that there was ice near the Martian equatorin the last few million years, but also that the ice melted to form liquidwater and then refroze. And this probably happened for many cycles," Balmesaid.

Balme'sstudy, funded by a UK Science and Technology Facilities Council grant, will bedetailed in an upcoming issue of the journal Earth and Planetary ScienceLetters.

Signs ofmore recent water activity could aide the search for past or present life onMars as such life, or signs of it, would be more likely to have survived thanany that might have existed earlier in the planet's history.

"Giventhat liquid water seems to be essential for life, these kinds of environmentscould be a great place to look for evidence of past life on Mars," Balmesaid.