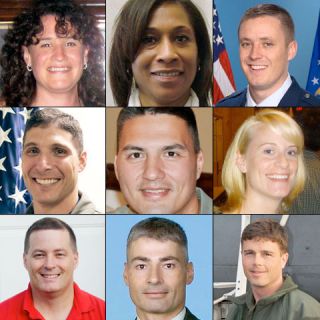 NASA on Monday unveiled the nine Americans making up its newest class of astronaut candidates, a group that will never fly on the space shuttle.

The six-man, three-woman astronaut class of 2009 is NASA?s first batch of new spaceflying recruits in five years. The candidates are expected to report to NASA?s Johnson Space Center in Houston, Texas, in August to begin two years of training.

?This is a very talented and diverse group we've selected,? said Bill Gerstenmaier, NASA?s space operations chief, in a statement. ?They will join our current astronauts and play very important roles for NASA in the future.?

NASA?s three aging space shuttles are due to retire in 2010 after completing construction of the International Space Station. The new astronaut candidates, therefore, will likely only train to fly aboard the space station, Russian Soyuz vehicles, and NASA?s shuttle replacement - the Orion Crew Exploration Vehicle and its Ares rockets tapped to ferry spaceflyers to orbit and back to the moon by 2020. The 11 astronauts of NASA?s 2004 class are all expected to have flown once on a shuttle by the fleet?s retirement next year, NASA officials have said.

?In addition to flying in space, astronauts participate in every aspect of human spaceflight, sharing their expertise with engineers and managers across the country,? Gerstenmaier said.

The 2009 astronaut class is a relatively young group, with ages ranging from 30 to 43. NASA selected the nine from a field of 3,500 applicants to make up the new class, its 20th group since the original seven Mercury astronauts were unveiled in 1959.

The group is a mix of military and civilians that includes: a technical intelligence officer with the Central Intelligence Agency (CIA), two NASA flight surgeons, a space station flight controller, a sprint-running molecular biologist, as well as two Navy test pilots, a U.S. Air Force test pilot and the special assistant to the Vice Chairman of the Joint Chiefs of Staff at the Pentagon.

"I think this is a thrilling time to be part of the space program, and I feel very fortunate to be starting as an astronaut candidate at this particular time," said Kathleen Rubins, 30, the molecular biologist, in a NASA interview.

Rubins is not the youngest person to be selected for NASA?s astronaut corps. Astronauts Sally Ride and Tammy Jernigan were both 26 at the time of their selections in 1978 and 1985, respectively.

Currently, there are about 85 active astronauts in NASA?s spaceflying ranks. The nine members of the 2009 class will join the astronaut corps after their two-year training regime.

NASA spokesperson Nicole Cloutier-Lemasters told SPACE.com that the nine NASA recruits will be joined by new astronauts from Japan, Canada and Europe, who will also train with them. In May, the Japanese and Canadian space agencies each added two new astronauts to their small cadre of spaceflyers, while the European Space Agency unveiled six new astronauts representing Denmark, France, Germany, Italy and the United Kingdom.

The new astronauts are all expected to report for training duty in late August, Cloutier-Lemasters said.

?We look forward to working with them as we transcend from the shuttle to our future exploration of space, and continue the important engineering and scientific discoveries aboard the International Space Station," Gerstenmaier said.