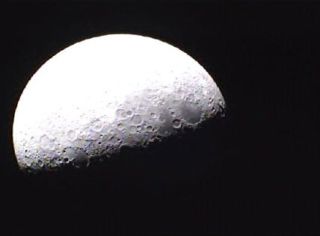 This image of the moon, one of the first by NASA's LCROSS spacecraft, shows the Goddard C Crater in a visible context camera view during a June 23, 2009 flyby.
(Image: © NASA.)

They may look grainy or overexposed to the untrained eye, but the new images of the moon sent by an unmanned NASA probe early Tuesday left scientists on Earth rejoicing.

The new moon views came from NASA's Lunar Crater Observation and Sensing Satellite (LCROSS), a small spacecraft ultimately destined to slam itself and an attached Centaur rocket stage into the shadow-covered crater at the lunar south pole in a hunt for hidden water ice.

The LCROSS images are NASA's first up-close look at the moon in a decade.

To a public spoiled by recent high-definition movies and photos of the moon taken by probes from Japan, China and India, the first views from LCROSS may come up short at first blush. Some SPACE.com readers wondered if the probe's raw snapshots met up with expectations on Earth.

Why? They were taken by a camera not designed to shoot the moon from so far out, and they gave scientists a taste of things to come.

The visible and infrared cameras on LCROSS - designed to scan the moon from much closer than Tuesday's flyby — are working, NASA officials said, and that was the point of the first images.

"The team is very pleased with the data that we received from the moon," said Jonas Dino, a spokesperson at NASA's Ames Research Center overseeing the LCROSS mission. "These raw images, from an altitude of 8,000 to 10,000 km, prove that the instruments are healthy and returning good data."

The $79 million LCROSS carries a three-color visible light camera among its suite of spectrometers and infrared sensors tailored for one specific purpose: watching a collision on the moon from close range to seek out signs of water ice. The visible camera is a tougher version of the RocketCam video cameras used to beam views of Earth and space from rockets and NASA shuttles, according to its builder Ecliptic Enterprises, Corp.

On Tuesday, LCROSS calibrated its instruments while zipping around the moon in a flyby that came within 2,000 miles (3,200 km) of the lunar surface at its closest. The probe's camera images, however, should be at their best on Oct. 9, when they watch from about 370 miles (600 km) away as LCROSS unleashes its attached 2.5-ton Centaur rocket stage to crash into a moon crater.

LCROSS instruments are designed to beam live images of the moon's south pole from just a few hundred miles (and closer) on impact day. The visible camera is expected to provide context only to record the Centaur stage's crash site and ejecta plume. Other infrared cameras, spectrometers and sensors are expected to map the debris kicked up for signs of water ice and catch the flash of impact.

Four minutes after the first crash, LCROSS itself will plunge into the lunar surface while other space and ground-based observers - including the high-resolution cameras aboard NASA's new Lunar Reconnaissance Orbiter - record the second lunar hit.

NASA launched LCROSS and the Lunar Reconnaissance Orbiter together on June 18. Together, they make up a $583 million mission to scout the moon for future landing sites and resources that may be used by future astronauts.

The orbiter arrived at the moon a few hours earlier than LCROSS on Tuesday and entered lunar orbit. But its high-resolution camera and six other instruments are not expected to begin science observations until after a weeks-long checkout period.

Unlike the Lunar Reconnaissance Orbiter, LCROSS transmits data and images straight to Earth instead of storing them in an onboard computer since any data tucked away on LCROSS would die along with the probe on impact day. Because of that, Tuesday's flyby was NASA's first chance to begin testing the spacecraft's instruments.

After Tuesday's flyby, LCROSS entered a long polar orbit that circles the Earth once every 37 days. The eccentric orbit will allow the probe to crash itself and its Centaur rocket stage into the moon at a steep angle on Oct. 9.

The final target crater will be chosen about one month before the planned crash, with LCROSS instruments powering up to record the event about an hour before impact, NASA officials said.

NASA plans to return astronauts to the moon by 2020 using its new Orion Crew Exploration Vehicle and Altair lunar landers. The lunar orbiter and LCROSS mission launched just over a month ahead of the 40th anniversary of the first-ever manned moon landing by Apollo 11 astronauts on July 20, 1969.