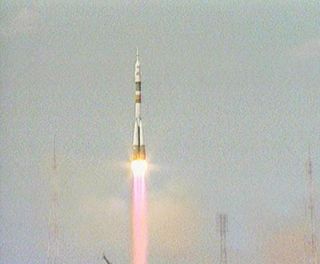 A RussianSoyuz rocket blasted off Wednesday carrying three spaceflyers from threedifferent countries on a mission to double the population of the InternationalSpace Station.

The Soyuzrocket launched at 6:34 a.m. EDT (1034 GMT) from Baikonur Cosmodrome inKazakhstan carrying the Russian-built Soyuz TMA-15 spacecraft and three peopleaboard set to make history as part of the space station?s first fullsix-person crew. It was about 4:34 p.m. local time at the Central Asianspaceport.

?We are aninternational crew in an International Space Station and I think this is astrength,? De Winne said in a televised press conference before launch. ?Tomaintain six people in a station by one single nation today, I think that wouldbe impossible.?

The $100billion orbital lab is the product of cooperation between the U.S., Russia,Canada, Japan and 11 countries in the European Space Agency. Doubling its crewsize will boost the amount of science and maintenance performed aboard, the spaceflyerssaid.

Romanenko,De Winne and Thirsk are the secondwave of the space station?s first-ever full six-person mission - Expedition20 - which will begin Friday when their Soyuz TMA-15 spacecraft arrives at theorbiting laboratory.

Constructionof the space station began in 1998 with the launch of its first piece, theRussian-built Zarya control module. The first crew - a small, three-man team -took up residence in 2000 after a U.S. connecting node and Russian crewquarters were installed.

AfterNASA?s tragic 2003 Columbia disaster, the station?s crew size dipped to onlytwo people - an American and a Russian - until the U.S. space shuttle fleetresumed flight two years later. By 2006, the station had returned tothree-person crews and now, after more than 10 years of construction, the spacestation has the internal living space of a jumbo jet.

?One of ourgoals with our three colleagues on orbit is to prove that the station cansupport six people for long duration,? Thirsk said.

Since theirmission began in late March, the Expedition 19 crew has been putting the finaltouches on the station?s life support systems that will support six people inspace.

Padalkawill command Expedition 20 once it begins, then hand over control of thestation to De Winne - Europe?s first station commander - when he and Barrattreturn to Earth in the fall.

One of themajor goals for doubling the space station?s crew is to increase the amountof science performed aboard the orbiting lab. With twice as many people onboard, the station crew should be able to nearly triple the number ofexperiments performed in a given mission, mission managers said before flight.

Scienceforms only part of a packed mission for the expanded space station crew.

Next month,the spaceflyers plan to perform two spacewalks in as many weeks to prepare thestation for the arrival of a new Russian module. They will also host the firstof two planned NASA shuttle missions to continue construction of the orbitinglab.

The Juneflight will temporarily boost the number of people at the station to 13 - themost ever - and will deliver the last piece of the station?s massiveJapanese-built Kibo lab. Another shuttle flight in August will delivermuch-needed supplies and equipment. Eight more spacewalks are on tap duringthose shuttle visits.

The stationcrew will end the summer with the planned arrival of Japan?s first unmannedcargo ship, the H-2 Transfer Vehicle.

?On ourcrew, we have a lot of fun, but we also work very hard,? De Winne said. ?So I thinkwhatever we do ? will be the lead for future space exploration in our solarsystem.?