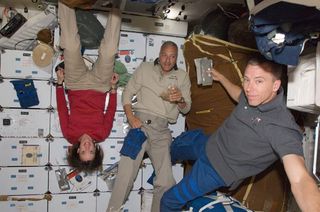 Astronauts Megan McArthur, Mike Massimino (center) and Andrew Feustel, all STS-125 mission specialists, prepare to eat a meal on the middeck of the Earth-orbiting Space Shuttle Atlantis on May 12, 2009 during while en route to the Hubble Space Telescope.
(Image: © NASA.)

HOUSTON — After a tough week fixing up the Hubble Space Telescope, it's time for a break for the seven astronauts aboard the shuttle Atlantis.

Shuttle commander Scott Altman and his crew will take some hard-earned time off Wednesday and rest up from their exhausting service call to give the 19-year-old space telescope another five or 10 years of orbital life.

The astronauts set Hubble free on Tuesday after a five-day spacewalk marathon to boost its cosmic vision and revive ailing science instruments. They are the last humans ever to see Hubble up close and left it more powerful than ever.

"Looking back at this mission, it has been an incredible journey for us as well," Altman said as Hubble slowly sailed away. "I think it has demonstrated the triumph that humans can have when they overcome challenges that are presented to them."

Altman and his crew are due to return to Earth on Friday to wrap up their 11-day mission to Hubble, NASA's fifth and last-ever flight to the iconic space telescope. Today, all they plan to do is discuss their mission with dignitaries and reporters on Earth, and then chat with astronauts aboard the International Space Station in a cosmic phone call.

During their mission's five back-to-back spacewalks, four Atlantis astronauts worked in two-man teams to install two new instruments, repair two broken ones that were never built to be fixed in space and replace other vital gear, like gyroscopes and batteries that were wearing out. Not only did the tireless astronauts overhaul Hubble, but they pushed through stuck bolts and handrails, flaky foil insulation and balky gyroscopes to hit all their mission goals.

Hubble's new instruments should push its vision deeper into space and peer back to a time when the universe was just 500 million years old. The universe is currently 13.7 billion years old. Hubble scientists plan to begin calibrating the space telescope next week and resume science observations by the end of summer.

The astronauts also installed a docking ring that will allow a robotic spacecraft to latch onto Hubble sometime in the 2020s and send it down to the Pacific Ocean at its mission's end.

Mission Control roused the crew early Wednesday with the theme music from the original "Star Trek" television show. The tune, composed by the late Alexander Courage, was chosen for the entire crew.

"That was a great wake-up call for the whole crew," one of the astronauts said this morning. "I'd just like to say to every one on the great planet Earth, 'Live long and prosper.'"