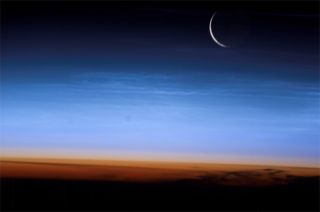 There is growing appreciation that outer space has become atrash bin, with the Earth encircled by dead or dying spacecraft, along withmenacing bits of orbital clutter - some of which burns up in the planet?satmosphere.

The big news of late was a smashup of a commercial Iridiumsatellite with a defunct Russian spacecraft earlier this year. Then there wasthat 2007 anti-satellite test by China, purposely destroying one of its agingweather satellites. These events produced largedebris fields in space ? adding to the swamp of cosmic compost.

But I sense a line of research that needs exploring: Theoverall impact of human-made orbital debris, solid and liquid propellantdischarges, and other space age substance abuse that winds up in a high-speeddive through Earth?s atmosphere.

There?s a convenient toss away line that is in vogue: thatsuch space refuse simply ?burns up? ? a kind of out of sight, out of minddeclaration.

What chemistry is involved given the high heating duringreentry of space leftovers made of tungsten, beryllium, aluminum and lots ofcomposite materials? The impact of these materials on Earth?s atmosphere - topto bottom ? would seem worthy of investigation.

As for total mass of uncontrolled objects that re-enter eachyear ? it?s in the range of 70 ? 80 metric tons. And that?s the trackable, bigstuff ? never mind smaller bits of orbital jetsam like bubbles ofstill-radioactive coolant that has been leaked from old nuclear-powered Sovietsatellites.

One study team that looked into the impact of de-orbitingspace debris on stratospheric ozone issued their findings back in 1994. Thework was done by an aerospace industry firm for the Environmental ManagementDivision of the Space and Missile Systems Center. They reported that objectsre-entering the atmosphere can affect ozone in several ways, but not on asignificant level globally.

Indeed, as an object plowsthrough the Earth?s stratosphere, a shock wave is created that producesnitric oxide, a known cause of ozone depletion. Spacecraft and rocket motorsare composed of metal alloys and composite materials that melt away duringre-entry. The researchers found that these materials, as they undergo intenseheating, also form chemicals that react directly or indirectly to consumeozone.

Overall, the study found that the physical and chemicalphenomena associated with deorbiting debris do not have ?a significant impact?on global stratospheric ozone.

Then there?s the work of Michael Zolensky of AstromaterialsResearch and Exploration Science at NASA?s Johnson Space Center in Houston,Texas.

Some 20 years ago, Zolensky led a team that found a ten-foldincrease in the abundance of large solid particles in the stratosphere between1976 and 1984. Using high-altitude aircraft, the NASA sampling program wasdirected at snagging particles of dust from comets and asteroids as they filterdown through the atmosphere.

However, when the collection plates were later analyzed,exhaust residue from solid rocket motor firings, protective paints that shedfrom the outer hulls of spacecraft in orbit, and particles of mostly aluminumfrom re-entering space hardware were identified.

?I don?t think anyone ever followed up on this,? Zolensky toldme. More study is needed on the density of particles, types of particles, howlong they are suspended in the atmosphere, and whether or not the amount ofdeorbiting detritus has increased over time.

Time to get smart

Another scientist flagging this issue is Martin Ross of TheAerospace Corporation in El Segundo, California. He points out that this typeof research is one where you need to have the science guys talking to theengineering community. ?And that usually doesn?t happen.?

Ross emphasized that orbital debris impacts onEarth?s atmosphere, at the moment, is not something to be too concernedabout. However, now is the time to get smart about what is taking place, hesaid.

But complicating that investigation, Ross noted, is thatairplane and balloons only operate at altitudes lower than where the re-entryprocess takes place. That upper stratosphere-lower mesosphere region has oftenbeen tagged as the ?Ignorosphere,? Ross said.

Even at balloon altitude there has been some recent,unexpected, insight. Scientists at the Indian Space Research Organizationannounced last March that ultraviolet-resistant bacteria had been found inEarth?s upper stratosphere, purportedly not found elsewhere on Earth.

?Everywhere we look on the Earth, we seem to find somethingthat we could call life,? Ross told SPACE.com. ?So I guess it wouldn?tbe too surprising that you?d find some layer of a particular microbe, orsomething, at various levels in the atmosphere.?

Ross, along with Darin Toohey of the University of Colorado,Boulder?s Atmospheric and Oceanic Sciences Department recently reported thatrocket launches may need regulation to prevent ozone depletion.

That study ? published in Astropolitics this pastMarch, an international journal of space politics and policy -- includesanalysis from Embry-Riddle Aeronautical University in Daytona, Florida andprovides a market analysis for estimating future ozone layer depletion based onthe expected growth of the space industry and known impacts of rocket launches.

In that assessment, the global market for rocket launchesmay require more stringent regulation in order to prevent significant damage toEarth?s stratospheric via ozone-destroying rocket emissions in the decades tocome.

The new study was designed to bring attention to the issue in hopes of sparkingadditional research, Ross said. Furthermore, getting a handle on the makeup ofhuman-made components and debris that speeds through the upper atmosphere ?from an accounting point of view -- would be a fairly simple thing to do, headded.

?All we really have right now are a small handful ofobservations of the emissions of a few rockets as they ascend to space. Eventhen, we lack critical observations in the plumes of many other types ofrockets to be confident in predictions of the impacts of the space launch fleetas a whole,? Toohey told SPACE.com.

?Add in the unknown impacts of vapors formed during reentry,and you can guess that we have some work to do to provide solid evidence neededby the space launch industry to design new vehicles that minimize thoseimpacts,? Toohey added.

Toohey said the good news is that, if the atmosphericsciences and space launch communities can come together to address this issue,?we have the expertise and tools to solve this before it ever becomes a seriousproblem.?

While getting a research handle on the Ignorosphere appearscalled for, the bigger mess to deal with is how best to de-clutter lowEarth orbit.

?Cleaning up space is the next space age?that I guarantee.It?s going to take a major new space program, not just one mission, to cleanthis stuff up,? said Marshall Kaplan at the Space Department of the AppliedPhysics Laboratory in Laurel, Maryland.

The time for space debris reduction thinking has come,Kaplan emphasized.

?You might think of this as the U.S. EnvironmentalProtection Agency?s largest Superfund cleanup,? Kaplan told SPACE.com. ?Thisoutweighs any Superfund concept that we?ve ever had before in terms of moneyand size,? he concluded.

Leonard David has been reporting on the space industryfor more than four decades. He is past editor-in-chief of the National SpaceSociety's Ad Astra and Space World magazines and has written for SPACE.comsince 1999.