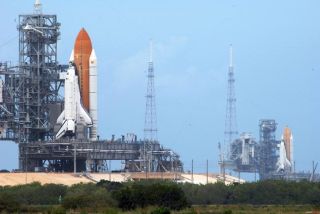 U.S. Houseand Senate negotiators agreed Tuesday on a budget resolution that wouldeliminate a hard deadline for the retirement of NASA's shuttle fleet andprovide $2.5 billion to fly in 2011.

Supporters say theresolution - which is expected to be up for a final vote this week - could helpavert the type of schedule pressure that led to the 1986 Challenger and 2003 Columbia accidents.

It also could stave off anestimated 3,500 job cuts at Kennedy Space Center in 2011 while minimizing afive-year gap between the last shuttle mission and the first piloted flights ofnext-generationspacecraft.

But, ultimately, the budgetresolution is just a recommendation and not an actual funding decision.

"This budget is asignificant step towards maintaining safety, minimizing thespaceflight gap, and preserving the highly skilled workforce at KennedySpace Center and throughout Florida," U.S. Rep. Suzanne Kosmas, D-NewSmyrna Beach, said in a statement.

"Kennedy Space Centeris an economic engine for our community and I will not stand idly by whilethese jobs are at risk."

The Bush administration in2004 directed NASA to complete the International Space Station and retire theshuttle fleet by Sept. 30, 2010. The agency also was told to develop a newpiloted spaceship by 2014 and return American astronauts to the moon by 2020.

NASA's new Apollo-styleOrion spacecraft will not be ready to fly before March 2015. The U.S. plansto rely on Russia to fly American astronauts to and from the station in theinterim. Legislators with ties to KSC - including U.S. Sen. Bill Nelson,D-Orlando, and U.S. Rep. Bill Posey, R-Rockledge - have been lobbying toeliminate the September 2010 deadline. It was set by the White House Office ofManagement and Budget after Bush outlined a new national space policy in thewake of the Columbia accident.

Nine more shuttle flightsare on NASA's schedule: eight to complete the station and a Hubble SpaceTelescope servicing mission scheduled to launch May 11.

NASA's historical annualshuttle flight rate is about four or five missions a year. But the agency'spost-Columbia flight rate has been about three per year. Some question whetherNASA can safely fly the nine remaining missions by the end of September 2010.

Accident investigatorscited schedule pressure as a contributing cause in both the Challenger andColumbia catastrophes.